If you know Lee Yoon, of Lee’s Wine Bistro, you know that he can throw a killer party.  He doesn’t plan them very often though, they seem to happen all on their own.  A couple of weeks ago, when he mentioned a wine tasting party on Facebook, I made it my mission to get there.

It turned out to be a cold and wet Sunday afternoon.  And even though I normally aim for the beautiful vine-covered patio, this time I head inside the bar.

Two of my favorite wine peeps, besides Lee, were there: Nick Morello and Robert Posey.  The former to pour his latest Morello Chardonnay and Pinot Noir (see blog post from last Friday, 12/10, for a review of those) and the latter, to pour a few wines from the THIRTY TWO bottles offered up: 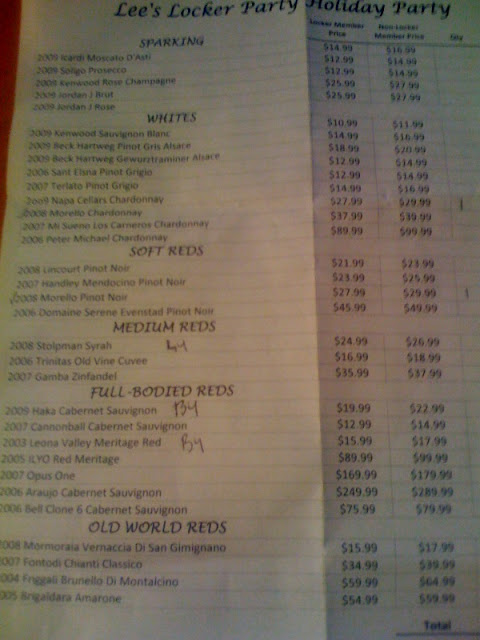 This was a lot, even for me, to be faced with, so I spent my time chatting with Nick, Robert, Lee and a few of the guests.  I learned that last year when Lee had this party it got packed, so this year he advertised it …quietly.  And, as I was only there an hour or so, I still don’t know if it got crazy after I left.

Besides Nick’s two wines I sampled the 05 ILYO Red Meritage.  (Per Nick, this wine is no longer available so I lingered over it.)  I also sampled the 2007 Opus One as it’s been forever since I’ve had one, and the blend was just as remarkable as I remembered.  From Robert I enjoyed the 07 Fontodi Chianti Classico, 04 Friggali Brunello Di Montalcino and the 05 Brigaldara Amarone.  Then I ordered a few to pick up later…

All in all, it was a very pleasant way to spend a cold afternoon. And, if it’s cold again when I come to pick up my order, I’ll have my wine – and the people at Lee’s – to keep me warm.