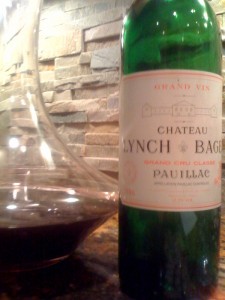 I bought this wine five years ago, as a 20th wedding anniversary gift to us, but EDDIE TALKED ME INTO CELLARING IT.  Why do we do that?  I could write a whole column on some of the cellars I’ve seen that have just too darn much wine that  I’m sure TASTED GREAT WHEN THEY BOUGHT IT – so why cellar it?  Okay, I’ll stop yelling…but you can already see which way this tasting is going.

Purchased for less than $200 at Valencia Wine Company as it’s a rare bottle.  Had I bought it when it came out, with a release price of about $40, that would have been a lot back then too.

Color/Appearance – Well, of course we broke the cork off, but that didn’t bother us.  We used a strainer over our decanter to catch any crumbles, and to see when to stop pouring when we saw the sediment – but there wasn’t much.

I poured a splash in my glass to test; Eddie was supposed to be cooking my dinner and enjoying his single malt scotch, but it didn’t stop him from swiping my wine.  I tried again.

Cloudy, not quite completely opaque, plum colored, but brown edge ran deeper than usual.  Judging by this alone I thought it may have gone too long.

Conclusion – I tried it again after five, and then ten, minutes.  What little bit of tannin there was had run its course.  I finished one glass with my Filet mignon and béarnaise sauce Eddie had made on this, our 25th anniversary dinner, while mentally tallying up how many more days I had before we would arrive in San Francisco, celebrating our anniversary with a little more style, and with a Silver Oak or two.  It was our silver anniversary after all.

Disclosure –  It may be my anniversary, but that doesn’t mean I’d disclose to Eddie how disappointed I was…it was only wHine after all.