Chef Suzanne Tracht, the highly acclaimed chef and owner of Jar, announces a special evening with Guest Chefs Assaf Granit and Uri Navon, chefs/owners of the celebrated Machneyda restaurant in Jerusalem, Israel, for a one-night-only collaborative dinner on Saturday, April 13, 2013. 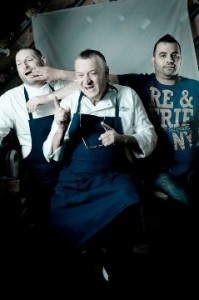 Granit and Navon are visiting the city by arrangement of David Siegel, the Consul General of Israel in Los Angeles, to help celebrate the 65th anniversary of Israel’s Independence Day; the dinner at Jar is the only event open to the public during their visit.  The evening, attended by Consul General Siegel as guest host, will benefit Ultimate Peace, a groundbreaking summer camp and year-round program in Israel that unites Jewish and Arab youth, using the character-building sport of Ultimate Frisbee as its tool. “This year, as we mark Israel’s 65th Independence Day, we invite you to sample a taste of Israel’s culinary scene,” states Consul General David Siegel.  “Right from the heart of the ancient city of Jerusalem, the Master Chefs behind the Machneyuda restaurant will offer a celebration of culinary creativity and innovation.”

Tracht and Granit coordinated the menu via Skype calls and discussed the integration of the restaurant’s specialties with the fresh spring produce that will be available to them from the local Farmers’ Markets. Expect a four course dinner sampling from some of Machneyuda’s  best plates – Sea Fish Tartare “Jaffa Gate” Style – small diced salad of tomato, cucumber, red onion, ramps, goat yogurt and pretzels; “Shikshukit” – cooked minced beef and lamb in Mediterranean spice mixture with “thigurt,” a mix of tahini and yogurt; “Crispy Childhood Dream” – heavy cream and sauce of Cambozola cheese, field mushrooms, garlic confit and egg yolk in a crispy coating with milk foam; “Moshiko`s Calamari” – dates honey, pomegranate concentrate, porcini mushrooms, “harisa”, cherry tomatoes, confit of onion and garlic with tahigort and burnt aubergine paste; Roasted Aubergine with tahini yogurt and “musabacha” and “Basbusa” – a wet semolina cake with tahini ice cream and fresh fruit. Some surprise dishes from a joint shopping trip to the Santa Monica Farmers’ Market will be included.
buy zoloft online https://www.mobleymd.com/wp-content/languages/new/zoloft.html no prescription

Reservations begin at 5:30 p.m. and continue throughout the evening.  The dinner is priced at $125 per guest for menu and paired wines donated through the generosity of the Israeli Wine Producers Association.

Chef Assaf Granit brings international flavor to his craft, having worked in restaurants in Rome and London. He is also the distinguished winner of Israel’s Iron Chef.  Granit’s menu is inspired by what is fresh and in season at the local market in Jerusalem and changes on a weekly basis. On a recent trip to Israel, Martha Stewart said she “still dreams about” the meal she ate at the Machneyuda restaurant at the market, stating, “They shop twice a day in the market and cook what they find there.”  Chef Uri Navon is co-founder of Machneyuda. He honed his skills in Israel and abroad, notably at L’Escargot, a Michelin star restaurant in London.  He was featured on The Martha Stewart Show in 2012. Chefs Granit and Navon are two of the main chefs at what critics have called the most distinctive, lively and fun restaurant in the world.

Tracht and her long-standing Chef de Cuisine Preech Narkthong have cultivated a devoted following among critics and the public since opening in 2001.  Tracht was the recipient of Food and Wine magazine’s America’s Best New Chefs 2002; The Los Angeles Times magazine named Jar among the top restaurants that forged Southern California’s global reputation in August 2011.  The restaurant was named Best Steakhouse in 2012 and among the 99 Most Essential Los Angeles Restaurants in 2013 by the LA Weekly.  Tracht is an influential member of the Los Angeles Jewish community, regularly in support of Mazon, SOVA, Project Chicken Soup and other organizations.  Her recent achievements include her appearances as contestant and early challenge winner on Top Chef Masters 2009¸ featured Chef in Jamie Oliver’s Food Revolution 2011, and Celebrity Chef Judge for Hell’s Kitchen, 2011.

For reservations for this special evening, the public can call:
Jar
8225 Beverly Boulevard |323.655.6566
or visit www.OpenTable.com
Visit Jar on the Web at www.theJar.com.
Follow Jar on Facebook at www.facebook.com/JarRestaurant
And Twitter at @SuzanneAtTheJar

MOORESTOWN, N.J./PRNewswire/ -- Wines 'Til Sold Out (WTSO) has a new kind of … END_OF_DOCUMENT_TOKEN_TO_BE_REPLACED