Attending a seminar sponsored by the official North American Sommelier Association (NASA), and by Tormaresca, a “producer of fine wines in both the north and south of the region”, I learned more than I thought possible about the heel of the boot of Italy, Puglia and its “native varietals, climate and geology.”

Our NASA lecturers, Alessia Botturi and Vito Palumbo, explained that NASA is the only official U.S. arm of the Italian association.  They share their knowledge on the smaller winemaking regions of Italy to make people more aware.  Today’s focus would be on Puglia and how it’s changed in the last 20 years from being known as “the cellar of Europe*” to a quality winemaking region of Italy.

(*Twenty years ago Puglia sold its wines to Europe – it was legal back then.  They sold bulk wine to France for their chardonnay, and being the home of bulk winemaking they had always good wine.  Puglia doesn’t want to sell to other parts of Italy today, they are investing money in their own region.  Now, with the decrease of quantity the quality has improved.  The change took place in the late 1980’s and we are now seeing their efforts in stores.)

Puglia is an ancient region, and there was lots of living going on before the Greeks came into the area.  Greek influences are still seen today in the grapes and vine training system.   Gastronomy, architecture and wine sum up the diversity of the region.  Sicily represents the gate to Africa, Puglia is the gate to eastern Europe.

From north to south in Puglia – there are vines everywhere.  There have been changes in the last 10 years as big winemaking families have arrived and helped to grow the quality and the marketplace.  They gave Puglia the “right tools to develop” their winemaking efforts.

It’s a Mediterranean sea region, with a warm climate almost year-round.   The area is comparable in size to L.A. and Orange County combined.  They want to be sustainable certified, 53% of the wine produced is red, and both the DOC and IGT production is increasing while table wine is decreasing.  There are 94k hectares planted, which is about four times what is planted in Napa.  The land is mainly flat and split into four main regions due to different soils types.  With 400 miles of coast, Puglia is one of the top ten places to visit in Italy, “no photo shop here, these photos are real.”  Our “virtual” tour included beaches, caves, beach towns, rainbows, olive trees, cheeses, pasta, salami, seafood and, of course, plenty of vines. 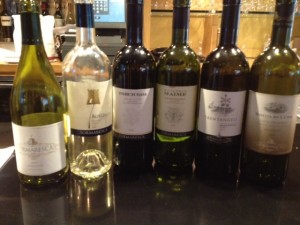 And the name Tormaresca means tower by the sea, which is the name of the producer’s estate name.

2011 Tormaresca Chardonnay, 90% Chardonnay, 10% Fiano – Lemon zest, cut pears, white pepper on the nose.  Crisp, acidic, lemon-lime, lengthy tingling finish on the front of the palate.  I found it light, palatable, and would be great with a cold seafood salad.

2009 Torcicoda, 100% Primitivo – On the nose I definitely get the black fruit, green peppercorns, wet bark.  In the mouth dry, nice juicy blue and black fruit.  I really like the fruit on this one,  nice balanced with smooth tannins.  This my favorite of the day so far.  14% alcohol.  (NASA notes:  This grape thrives in the area, an early ripener, since the Roman time.  A full body, juicy reds, blackberry/plums/pepper flavor profile.  The name Torcicoda means tail twister, nothing to do with harming horses!)

2005 Masseria Maime, 100% Negroamaro – A darker color indicative of the age, bowl of dark/jammy fruits on the nose, a vegetable like sautéed mushrooms and a smoky characteristic.   On the mouth I got a dryer quality and less fruit, more smoke…was better with the mortadella and crispy Italian bread they gave the students.

Nice with the cool, seasoned meatball it was served with. Organic.  (NASA notes: Aglianico is not from Greece, only grown by the Greeks in ancient southern Italy.  Can age 20-30 years.   Called the Barolo of the south due to finesse, power, big structure/tannins. Very few producers in Puglia.) 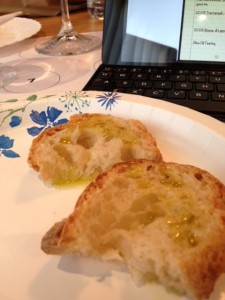 Puglia is also one of the first and largest olive oil producers in Europe.  Our speakers said it was the best in the world.  Different from Tuscany oils.  I relished both the sweet and spicy notes.  They recommended that you eat as a starter in the summer on grilled bread and tomato as bruschetta.  Everyone there wanted to buy it today, but it was not available.

MOORESTOWN, N.J./PRNewswire/ -- Wines 'Til Sold Out (WTSO) has a new kind of … END_OF_DOCUMENT_TOKEN_TO_BE_REPLACED