As an aerospace engineer I deal with a lot of problems and issues.  In this role it is very important to review all of the details before presenting results to management and finally customers.  Most of you know my love of natural cork closures for wines.  However,  I have many colleagues and friends that love screw caps as an alternative.  I am not going to write another article on the pros and cons of these two closures as we have beaten this to death.  This topic will always present a difference of opinion.  This difference is based mostly on the intended use of the wine.  The most important thing is to make sure not to overlook the details, whether big or small,  when trying to determine the source of Trichloroanisole (TCA) or corked wines. 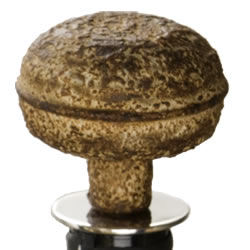 People almost always blame cork as the source for TCA in wines when it gives that musty, wet paper or cardboard smell.  For the most part the general public cannot detect TCA below 6-8 nanograms/liter.  There is a very small percentage of individuals with a very keen sense of smell and taste that can detect TCA at around 2 nanograms/liter, but these are a select few and are by no means the majority.  TCA in natural cork has been reduced dramatically over the years via new technology and means of detection as well as cleaning/sanitizing processes.  Laboratories are now using Gas Chromatography Mass Spectrometry (GCMS) which is used to identify trace chemicals,  such as TCA,  down to levels as low as 0.5 nanograms/liter.
Another change that has taken place is in the cleaning process which includes the removal of chlorine as a sanitizing agent both in cork and the equipment during the wine making process. The United Cork Council has performed laboratory tests on corks for TCA providing us with measurable results using high tech calibrated equipment that allows statistical analyses on the effectivity of TCA removal from natural cork.  The actual lab test results acquired provides useable metrics that we can statistically show the accuracy of the possible amount of TCA present in corks.  But why does no one look beyond the cork if a wine is tainted with TCA?  Generally, it is felt that they have found the smoking gun if the bottle uses natural cork and come to the conclusion to eliminate cork closures.
Then what about cases where a winery has been found to be the source and not the cork?  Does anyone add this into the equation?  Four wineries that have suffered from TCA, where corks were not the cause were Hanzell, Chateau Montelana, Beaulieu Vineyard and Gallo.  If there are four I am sure there are others.  In the case of Hanzell, the winery was shut down for 6 months to find the cause of TCA in their wines.  The source of the TCA was found to be two of the original transfer pipes that were about 50 years old.  These pipes were stained purple stemming from years of use within the winery.
So here is a situation where it doesn’t matter what type of closure is used in the bottles, TCA taint is present in the wine itself.  Placing wine from any of these four TCA affected wineries into corked bottles, in my opinion, leads to the cork closure being used as the scapegoat.  Jumping on the bandwagon becomes the automatic conclusion rather than pursuing additional research to determine the actual root cause of the TCA source.  This lack of true statistics and understanding is one of the prime drivers being used to switch to screw caps and eliminate cork closures.  Now comes this scenario…what if these four wineries used screw caps as opposed to natural cork what would the conclusion be?  Would the wine be looked at as the source or would the wine world now have a new term that the wine was “capped”?
The one thing to remember with issues like TCA is that you need to look at the big picture.  If you only research a problem based on what is perceived to be the smoking gun you are masking or possibly covering up the real source of the problem.  If you want to do due diligence the wine must be tested pre and post bottling to validate the source.  Corks are already screened through new processes that have been put into place by the Cork Council at cork producing facilities.  Christian Butzke, PH.D. of the Associate Professor Food Science, Purdue University Stated in his article Cork Taint, ” The habit of blaming cork may explain why estimates of TCA contamination based on anecdotal evidence range from 2 percent to 10 percent and above.  But a large and growing amount of hard evidence concludes that the incidence of TCA has dropped precipitously in recent years and is commonly measured at less than 1 percent of wines sealed with real cork.”
So whatever you do make sure that you look at the BIG PICTURE and all of the possibilities before drawing a conclusion.   As these aforementioned wineries discovered they in fact were the culprit and not the cork.  Something that I’m sure came as a shock to a lot of people in the wine world as well as the wineries themselves.  In these instances the scapegoat, being the cork, was vindicated however the disagreement on closures in wine will go on for years to come.
Cheers,

Who likes sparkling wine? The ultimate wine for celebration, and celebrated as a … END_OF_DOCUMENT_TOKEN_TO_BE_REPLACED