I remember Tips restaurant, actually just the bar, and how you were only allowed to order two of some of the tropical drinks.  I was a wee lass, well over 21 but even then, the drinks inspired me…I knew that there was a big world of wine, cocktails and fine food out there in the world.  I’m happy to see that my favorite local French restaurant has combined them together!  I’ve written about the food and the wine list at Le Chene before, today I give you more of how Tips meets French Cuisine:

Only From Le Chene: The Tips Tropical Drinks Menu in Honor of Candy Menor

August 25, 2014 – Santa Clarita, CA – Ask anyone that has lived in the Santa Clarita Valley for more than a decade about the infamous Tips bar that sat at the top of Lyons Avenue where it met the 5 freeway. Many will remember bartender Candy Menor and his festive and fruity tropical concoctions. 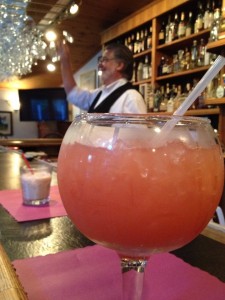 Fast forward another decade, and Candy could be found at the City Club restaurant, and later, at its sister restaurant, Le Chene. There he worked alongside David Ford, and the two would continue to work alongside each other, later, at Le Chene where David continues to work today.

“Candy was a great bartender,” Juan Alonso, owner of Le Chene began. “He could make anything you wanted. And, before he passed away, he wanted to show his respect by sharing his secret recipes with Le Chene customers – only.”

The new Tips Tropical Drink Menu includes the Lapu Lapu and Volcano – both drinks are served in 53-ounce glasses and, just like at Tips, you are not allowed to share more than two.

The drinks are offered daily at Le Chene and are also included in the Happy Hour Sundays through Fridays from 4:30 to 7:00 P.M.   All 14 tropical drink selections are offered at a 25 percent courtesy discount at that time, along all other cocktails and dozens of items on the Bar Menu. Additionally, both the discounted bar menu and cocktails are all also available via table service on the patio overlooking the expansive gardens.

Alella, a small wine district in the north eastern part of Spain centers around … END_OF_DOCUMENT_TOKEN_TO_BE_REPLACED