Where does one go after a restaurant garners the “ultimate burger” honor in the Santa Clarita Valley? Humbled by the award, Alex Rush, co-owner of Rustic Burger, upped his burger game when he held a tasting event for members of the local press in which he showed exactly how his craft burgers pair with his craft beers. 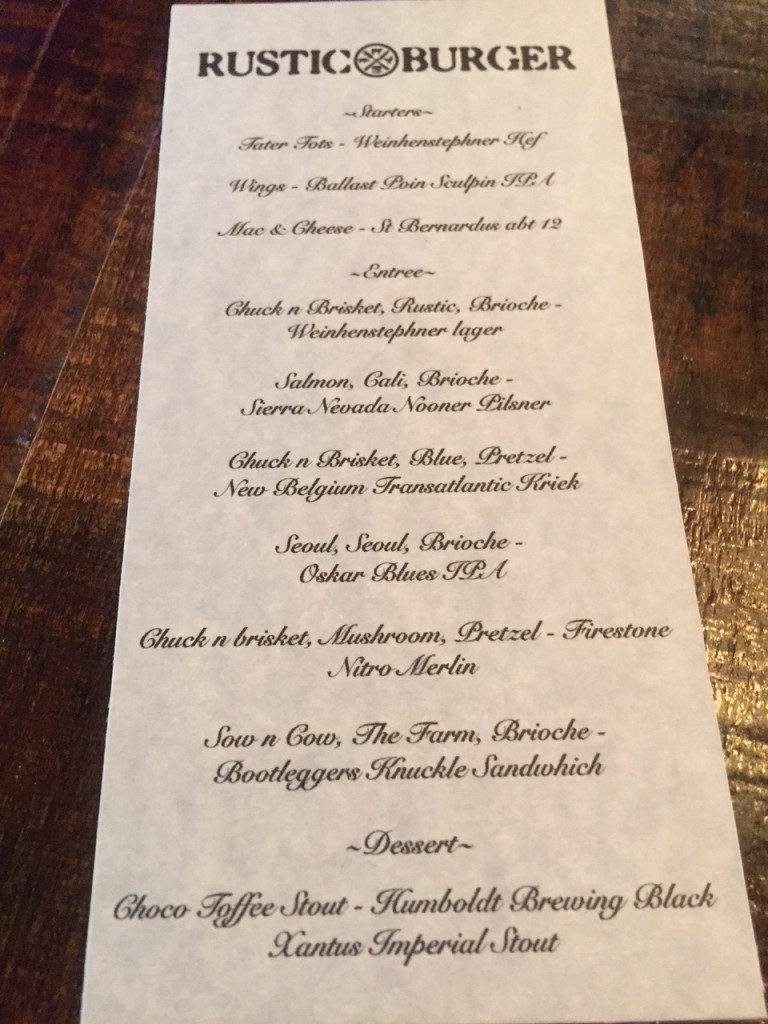 “It’s not always the best idea to start with a lighter styled beer and end with a dark,” Alex began. “it’s too crazy on the palate.”

The press learned just that as they dove head first into the appetizers like Mac and Cheese made with creamy Mornay sauce, panko and chives alongside the Belgium St. Bernardus abt 12 that “accented the mellow dish” according to Alex. As the dish and the drink disappeared, which would be the trend of the night, all agreed it was a great pairing.

The Weinhenstephner Hef (pronounced Wine-stephan-er) balanced well with the three different housemade dipping sauces (just like all of the meat is made in house) for the toasty Tater Tots.

The Ballast Point Sculpin IPA calmed the wings in their sweet chili sauce.

A Weinhenstephner Lager also complemented the classic Chuck n Brisket. A later pairing of the Chuck n Brisket, with the addition of blue cheese and a pretzel bun (the only bread not made on the premises) was paired with a tart red-colored New Belgium Transatlantic Kriek. Alex said the pairing was “a play on a fig jam and brisket pairing, and that the bitter arugula leaves worked well with the fruit beer.” And a third pairing had this burger, with the addition of bacon, cheese, mushroom, thyme and aioli, alongside a Firestone Nitro Merlin that was one of Alex’s favorites. The Firestone was similar in taste and color to a classic Guinness, yet “smoother and slightly sweeter.”

The salmon burger on brioche with an Allagash White, with notes of “lemongrass, coriander and orange peels”, was another outstanding pairing, both visually and on the palate.

Of course we had their signature burger, The Farm (OMG this “sow and cow” combo included pork belly and bacon, egg, arugula, pepper jack cheese and aioli) this time with Bootlegger’s Muscle Sandwhich. And then came the subtly marinated Seoul, Seoul burger on brioche with and Oskar Blues IPA.

“People have an affinity to food especially when it invokes memories,” Alex said. “Things like the burn of raw white onions, the fresh snap of a pickle and the comfort of a tomato remind me of burgers I had growing up with my dad. We respect those memories here.”

And with that, we finished up the remarkable tasting with one of Rustic Burger’s homemade shakes, this time blended with one of their beers: Choco Toffee Stout – Humboldt Brewing Black Xantus Imperial Stout, that though the group was over sated, not one left a single drop in their glass.

Come see these burgers and beers, a rotating selection of the latter not found in any other Santa Clarita Valley restaurant, as this is not something to miss! 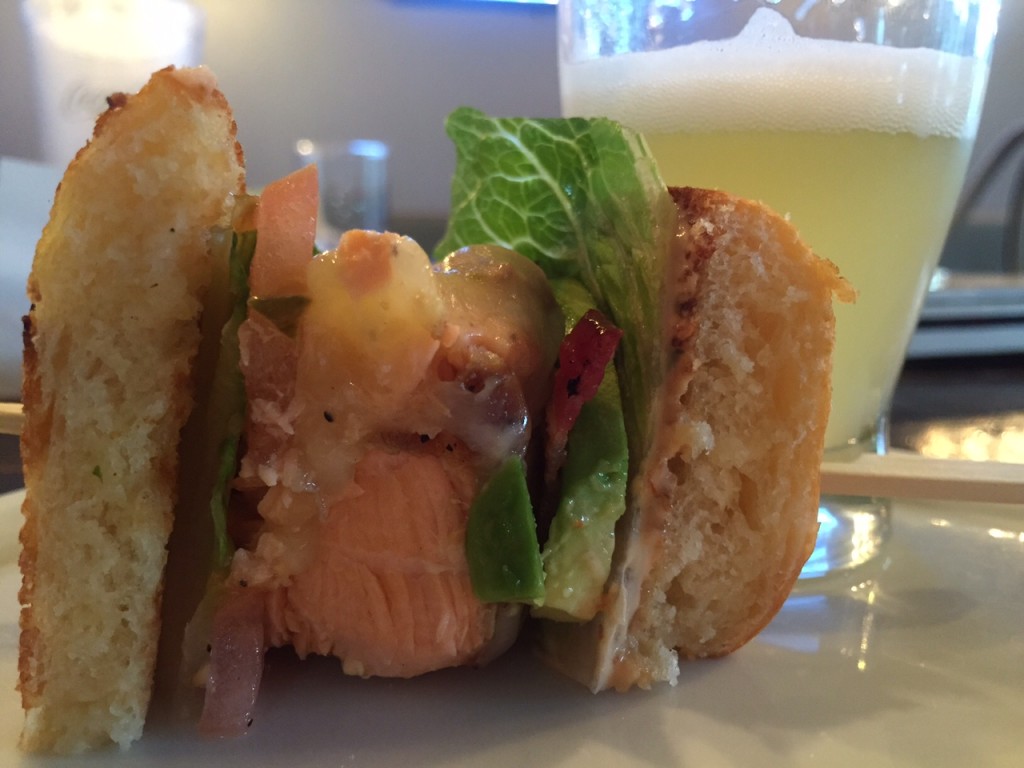 Salmon burger on brioche with an Allagash White 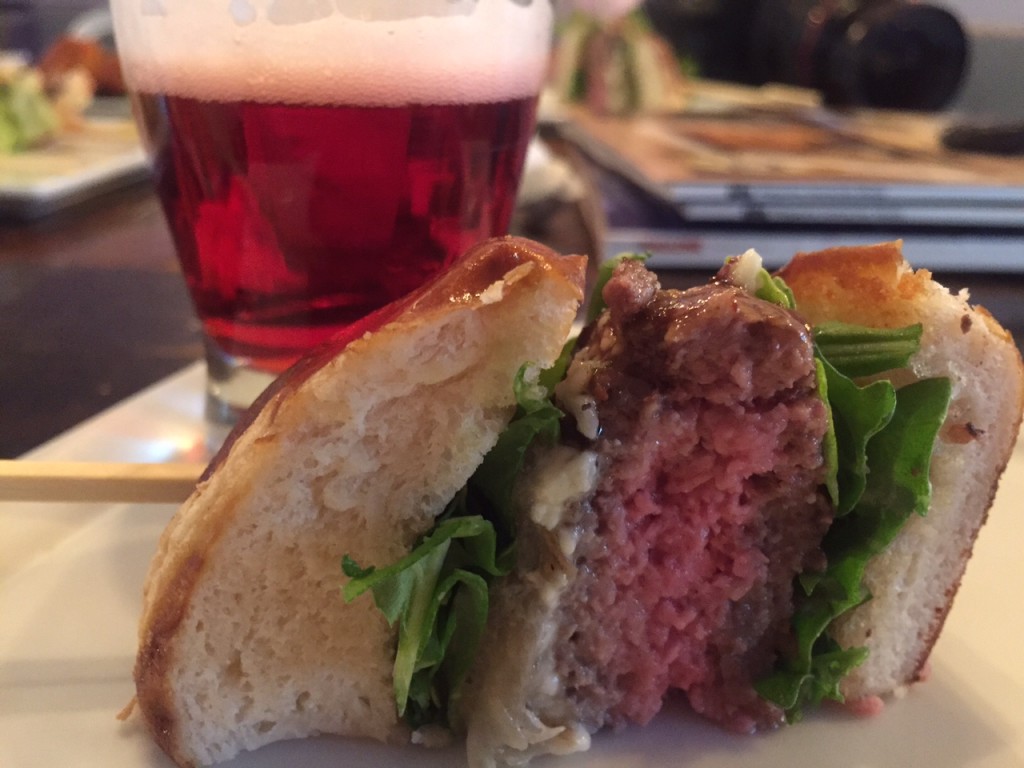 The KFWE is the destination for wine and food lovers alike, affording … END_OF_DOCUMENT_TOKEN_TO_BE_REPLACED