At press time Maru will be no more. One of two local restaurants serving French cuisine – Le Chene being the first – Maru was also known for its fresh sushi, Japanese and French daily menu and eclectic selection of wine and Sake. But, let’s not stop there… 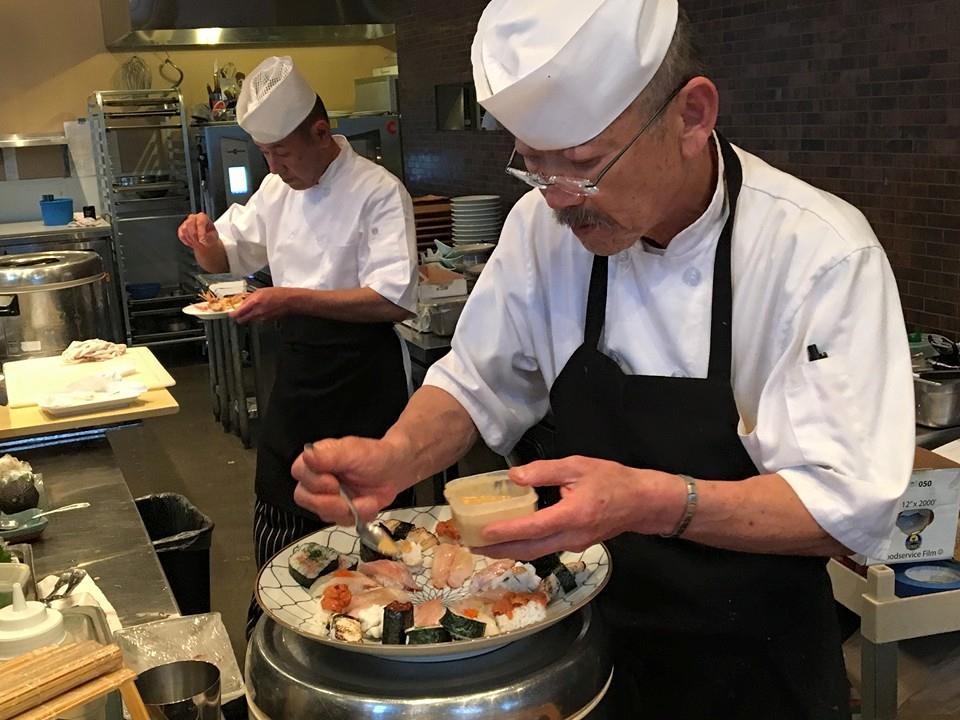 Maru (aka Maru Sushi) provided Santa Claritans with a trendy, upscale non-chain restaurant akin to those found in Santa Monica. And now Maru is rumored to be moving to Santa Monica.

The first time I went to Maru, soon after they had opened in March of 2002, I wrote this in my Signal column:

I still didn’t expect to be catered to by seemingly every sushi chef, waitress and busboy employed at the new sushi bar, Maru Sushi, on Town Center Drive. Or to not only get the rare, not ever in season Toro, or try, what a busboy suggested, the even rarer “Blue fin tuna”. What almost, just almost, peaked over the great flavored sushi was, ahem, the solicitous service. It had been a long time since I remembered a waitress hovering after an order to offer suggestions, ask our “sushi” history and smile the entire time. When I obliged her by asking what brands of Sake they served I was amazed to learn that this particular establishment had one hot Sake and almost a dozen in the “cold” Sake variety. (If you’ve never had cold it is the best during those long, hot, dry summer months to go along with, well, Blue fin tuna.)

The service was so impeccable, accompanied by such artistic and mouth-watering sushi presentations, Eddie and I went a little overboard in our samplings. (Did I mention that we were overdue for a night out?) So when the check finally came we had a tough time parting with our new favorite restaurant. I stopped one of the waiters, who seemed to be the oldest and I guessed might be the owner. I learned that no; he was not the owner but that his son, back in the kitchens, was the accomplished cook/owner we were not destined to meet that night.

That accomplished cook/owner, of course, was Chef Jason Park. And my favorite waiter was to become the long and lean Alex. There are several other wonderful people that worked at Maru at the beginning, and now at the end, and I wish I had gotten all of their names.

Fast forward to November 30, 2012, my last-time-to-dine before their closure, announced to be on December 12. Jason had commented on his Facebook page to keep trying to get past their busy signal to make reservations, which we did. A couple of friends joined us that night in what another guest commented was like “The Last Supper.”

Jason was working the sushi bar. I got up to say hello, stopping by three other tables to catch up with other friends that said things like, “This was our favorite restaurant, where will we go now?” and “We hate that this is happening.”

Lucky for me, Jason was just waiting for a group to arrive that had reserved his section, so we had a few moments to talk. He still appeared frustrated about moving, yet resolute that it was time.

I told him that 80% of the comments on Facebook begged him to relocate, and most suggested that he take up residence in downtown Newhall. He said he was meeting with investors daily, but staying in Santa Clarita did not seem possible.

So, the few photos that I took will have to suffice in my Maru Memories album for now. And a dream, of solicitous service, mouth-watering food and possibly a new First Supper to come, even if we have to drive to Santa Monica to get it.