CASTAIC, CA – More than 50 Santa-Clarita area musicians will the music of the late David Bowie April 29 at the studios of Lifton Institute of Media Arts & Sciences (LIMS) in Castaic.

Sponsored by the David Fernandez Songwriter Salute Series, the event will be held to benefit the WiSH Education Foundation for the William S Hart Education District. 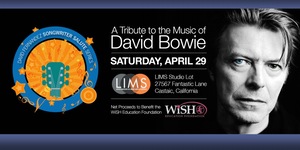 David was a musical purist who wanted everyone to appreciate the significance of his favorite artists.  Letting the music do the talking, he organized an intimate gathering of musician friends to experience the power of songs written by masters of the craft, the first of these being Bob Dylan.

David’s concept was an instant hit.  Each subsequent salute celebrated songs written and performed by an influential artist or group.  David organized the first four salutes culminating with an unforgettable tribute to the music of The Beatles.

When David passed away in 2008, the “Saluters” continued to carry on his wonderful tradition.

What began as a modest, yet spirited backyard get-together featuring 14 musicians has grown steadily in popularity. The Bowie event in April will involve more than 50 musicians performing 28 songs for an audience of more than 450.

Beer, wine and food will be provided at the show by Wolf Creek Brewery and Jersey’s Mikes Subs.

To buy tickets go to: