LOS ANGELES, California – Mike and Kathie Gordon, owners of Toscana, the extremely popular Tuscan restaurant in Brentwood with a devoted following of food-lovers, celebrate their 30th year in business this year. In tribute, they’ve planned a week-long nod to their original menu from 1989 that started the story. Festivities begin Monday, June 10 and continue through Sunday, June 16, 2019, when the Gordons and the Toscana team invite their regulars and the public to join the festivities. The Toscana kitchen will offer their classic dishes of Salsicce all’ Uccelletto; Ravioli Radicchio; Scampi e Fagioli; Pollo al Mattone; Costolette d’Agnello alla Trevisana; and Florentina ala Bracie, among others that were featured on the opening of the restaurant and continue to be favorites to this day. The Gordons will be in-house nightly to personally greet their many loyal guests and to welcome new customers. In appreciation of many years of loyalty, they have created a special memento as a gift of thanks to the diners. 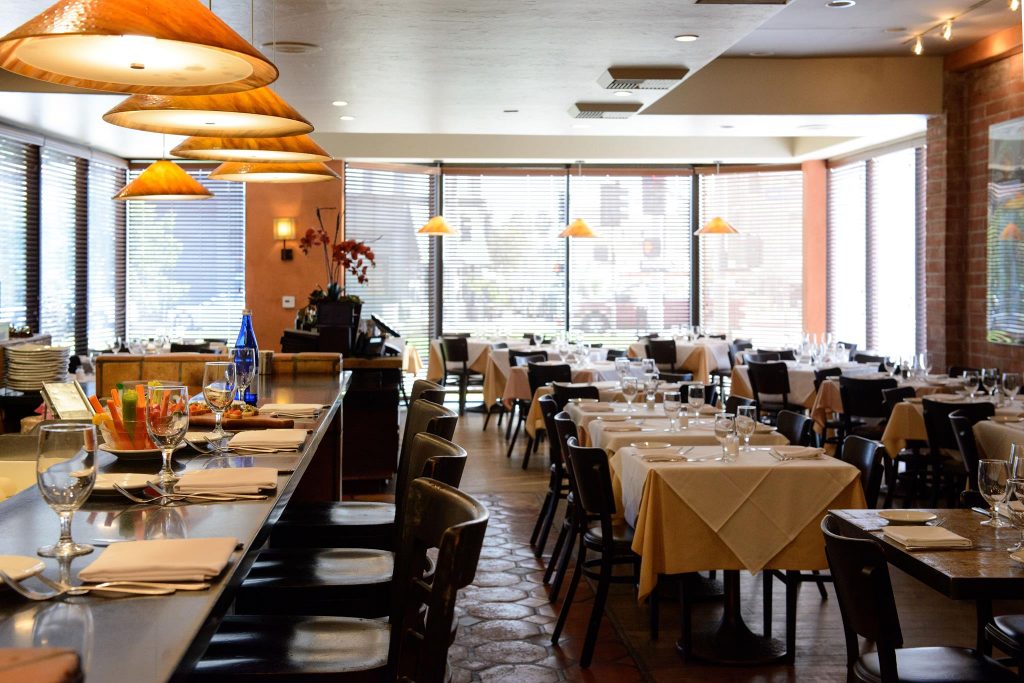 While looking back over the three decades, the Gordons have set their eyes to the future with an energized kitchen team. Newly installed Executive Chef Luca Crestanelli of Toscana’s sister restaurant S.Y. Kitchen in Santa Ynez will bring inspiration to the classic Tuscan cuisine. Working closely with Crestanelli is the recently recruited Samuele Minin as Chef de Cuisine. The two collaborate on Toscana’s menu and daily specials, infusing them with their Italian traditions along with the flavors and ingredients of Southern California’s markets.

Toscana was quietly opened in April 1989 by first-time restaurateurs Mike and Kathie Gordon and musician Doc Severinsen, who dreamed of creating a modest Italian trattoria in their neighborhood where friends and family could come together to eat the simple, delicious food they found in the small towns and kitchens of Tuscany. The trattoria’s success exceeded all expectations from the start. The cozy yet lively environment was discovered and soon populated by celebrities, industry leaders, politicians and athletes, along with locals and visitors from around the world. Dining on the clean, flavorful dishes of Toscana encouraged their clientele to return often; typically an average of several times a week.

The Gordons found it gratifying when their customers began bringing family and business associates for gatherings of their own. Every year, Director Michael Mann hosts a special dinner for all of the Oscar-nominated directors during the exciting week leading up to the Academy Awards. Just a few years back, Composer and Producer David Foster needed a place for a last-minute respite for acclaimed musical artists Andrea Bocelli, Josh Groban, Barbara Streisand and others following a long day’s rehearsal for the Grammys, and brought them to Toscana to relax and share dinner. Long-time patrons have had yearly multi-generational birthday and anniversary celebrations throughout all three decades. Today, grandkids of the original regulars are some of Toscana’s favorite guests.

From the moment the colorful, signature Pinzimonio (Italian-style crudité) arrives at the table to nurture everyone with a first bite, to the farewell thank-yous from the staff, everyone is treated like family. The Gordons’ warm and welcoming personalities inspire the style of the friendly and professional staff – the dear Alberto, now retired to Italy, and Mark, Max, Roby and Emilio among the others – many of them have been working at Toscana since opening day. Thirty years later, the restaurant continues to thrive and buzzes daily with the electricity of anticipation of another wonderful meal.

The talented culinary team at Toscana has firm Italian roots. Executive Chef Luca Crestanelli was born and raised in Verona, Italy, where he received his Culinary Arts degree. Luca’s career has taken him across the globe which helped refine his epicurean sensibilities through exploration and hands-on discovery of regional cooking styles. After stints at Vincenti in Brentwood and positions as a private chef, he was invited to work for the Gordon family, launching Bar Toscana in 2010. In 2013 the three partnered to open a third restaurant, S.Y. Kitchen in Santa Ynez, California, where he is based today. Born in the small town of Griis di Bicinicco in northern Italy, Chef de Cuisine Samuele Minin grew up in his family’s restaurant, learning how to create traditional plates from his parents. He moved to the United States as a young teenager with an abundance of energy and a drive to learn from seasoned Italian chefs around the country. Since arriving in California in 2010, he’s proudly opened several restaurants – and most recently served as sous chef at Nerano, Toscana’s sister restaurant in Beverly Hills.

The Gordons are grateful for the longevity of their restaurant and are actively involved in the management of Toscana, the adjacent Bar Toscana, Nerano in Beverly Hills and S.Y. Kitchen in Santa Ynez, California where they have a home.“As Toscana looks to the future, it continues to retain whatever is good from the past,” states Mike and Kathie Gordon. “We feel as if we belong to a special part of the world where each generation is connected to all the ones that went before.”