RICHMOND, Va. (PRWEB) – “Stockinghall,” from Murray’s Cheese in New York, was named “Best of Show” among 1,742 entries at the American Cheese Society’s (ACS) 2019 Judging & Competition. The results were announced tonight at the 36th Annual ACS Conference: Virginia Is For Cheese Lovers™, at the Greater Richmond Convention Center, Richmond, Virginia. Second place “Best of Show” went to “Professor’s Brie” from Wegmans Food Markets in New York. Third place “Best of Show” was awarded to “Aries” from Shooting Star Creamery in California. 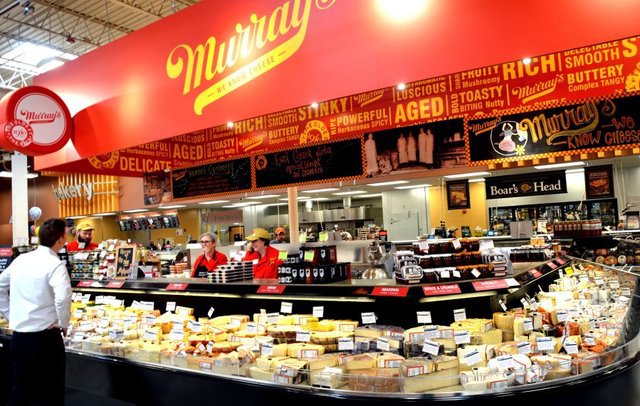 This year’s “Best of Show” cheeses indicate that the traditional European practice of producers working in collaboration with “affineurs” is growing in the U.S. Affinage is the practice of aging cheese in caves carefully regulated in temperature and humidity. Both the first and second place “Best of Show” cheeses were created through such partnerships between cheesemakers—in this case, Old Chatham Creamery—and affineurs, in this case both retailers. First place winner “Stockinghall” was produced by Old Chatham Creamery then handed over to Murray’s Cheese to age in their Long Island City caves, while “Professor’s Brie,” also made by Old Chatham Creamery, was aged in Wegmans Food Markets’ caves in Rochester, New York.

“We worked with Old Chatham Creamery for several years to make ‘Stockinghall,’ which is their only cheddar,” said Josh Windsor, affineur for Murray’s Cheese. “Aged cheddars are finicky and hard to produce—this cheese was truly a labor of love.”

“It has been a wonderful experience to work with our team to create our cheese caves in Rochester and work with cheesemakers on unique cheeses for Wegmans,” said Cathy Gaffney, vice president at Wegmans Food Markets and ACS board president. “’Professor’s Brie’ was named in honor of Dave Galton, owner of Old Chatham, and my former professor at Cornell University. This award is proof that this model of production can create phenomenal American artisan cheese.”

“We’re so proud of the Old Chatham team and our partners,” said David Galton, owner of Old Chatham Creamery, “We strive to make cheeses that meet the high standards of our partners, who are truly the best creameries in the American artisan cheese industry.”

Third place winner “Aries” was created by cheese industry newcomer Avery Jones. Only 15 years old, Jones proves that exceptional cheeses aren’t only produced by established cheesemakers. The daughter of Reggie Jones of Central Coast Creamery in Paso Robles, California, she is part of a new generation driving excellence and innovation in the American artisan cheese industry.

“Watching Avery become the cheesemaker she is today has been amazing,” said Lindsey Mendes, production manager of Central Coast Creamery. “Cheesemaking takes a lot of blood, sweat and tears, and it’s heartening to see that the younger generation is so passionate about the industry. This win couldn’t have happened without the entire Central Coast Creamery team.”

For a list of this year’s winners and judges, visit https://www.cheesesociety.org/competition-winners. The 2019 ACS Judging & Competition Media Kit breaks down awards by product, dairy location and milk source, as well as producers’ contact information. The 37th Annual ACS Conference & Competition will take place on July 22 – July 25, 2020, in Portland, Oregon.

About the American Cheese Society
The American Cheese Society (ACS) is the leader in promoting and supporting American cheeses. At 1,800 members strong, ACS provides the cheese community with educational resources and networking opportunities, while encouraging the highest standards of cheesemaking focused on safety and sustainability. ACS strives to continually raise the quality and availability of artisan, farmstead, and specialty cheese in the Americas. Since its founding in 1983, ACS proudly hosts America’s foremost annual educational conference and world-renowned cheese judging and competition. For more information, visit https://www.cheesesociety.org.

We’ve been covering the Nightclub and Bar Show in Las Vegas for a few years. … END_OF_DOCUMENT_TOKEN_TO_BE_REPLACED