If you had a chance to read my opening story on the Universal Whisky Experience 2018 – aka the Nth – you knew that besides the four hour grand tasting there were master classes held the following day. Of the several that were offered, in two different sessions, I was able to snake a seat in two.

This account is of my time, well spent indeed, with the very entertaining and well educated Whisky Ambassador Ewan Morgan.

With no less than seven single malts in front of each student, and no labeling to enlighten us to the year or barrel profile, I knew I would be hanging on Morgan’s every word. And lucky for me there was a wee lesson to be learned between the tasting.

In 1760 the small town of Oban (aka “Little Bay”) was already known for “whisky, wool and straw hats” according to the town’s documentation. By 1794 distilling began and by 1887 they were up to 35 thousand gallons per year. Present day Oban distills 660 thousand liters annually. In all that time the town has stayed pretty much the same.

Anxious to taste, Wagner said we would now note how the whisky would change in the bottle – due to age – and once opened in our glass.

This whisky was simply titled “Newmake” – which essentially means that it had no maturation in oak or color added. Distilled just about two months prior, on February 13, 2018, I noted an aroma of golden raisins – which prompted a later comment about how wine people use descriptors that whisky people don’t.

LOL While Morgan said that though this whisky had a long way to go it still carried the “distinct fruity character Oban is known for.” When someone else detected a malt aroma Morgan told us to rub our hands together quickly and then take a whiff. That aroma, he said, is the same as the malt we find in some whisky.

This proved to be a 9 year old, and not tasted before. One of Oban’s “experiments” in releasing earlier than usual. The group thought it was a “fruit bomb, both hot and sweet.” The addition of some water reduced the alcohol burn, which is often the case, but I didn’t note any new aromas.

A 17 year old whisky that had sweetness and a good balance of flavor and alcohol. About 53% ABV. This was one of Wagner’s favorites.

An 18 year old with 43% ABV that I got aromas of caramel and popcorn, Wagner noted fig and vanilla. The whisky is only available in the U.S. Lucky us. And less than 9,000 bottles were made.

Next came the “Little Bay” blend of single malted between nine and 14 years old, 43% ABV. The whisky had matured in both rye barrels and former sherry casks – marrying them both in the same tank for nine months. I got sweet notes or caramel and vanilla bean.

Prepare yourself now – this 12 year old whisky had been distilled circa 1968. Morgan had obtained two bottles from a collector in London for about $350 each. The fruit and cream notes were perfect on my palate, and very little burn. Wagner also noted a heavier, viscosity and smoky quality. Of course this would be my favorite in the tasting. It’s not often you get to taste both a rare and aged whisky and I really wanted to linger over it.

Our last whisky was a 21 year old. 58.5% ABV that had aged in American oak and former sherry casks. And though the whisky was cask strength it required no addition of water to open up the aromas and flavor. Wagner noted coconut, fruit, fudge and burnt marshmallow on this one…while I was wondering why he sounded like a wine sommelier. LOL again. 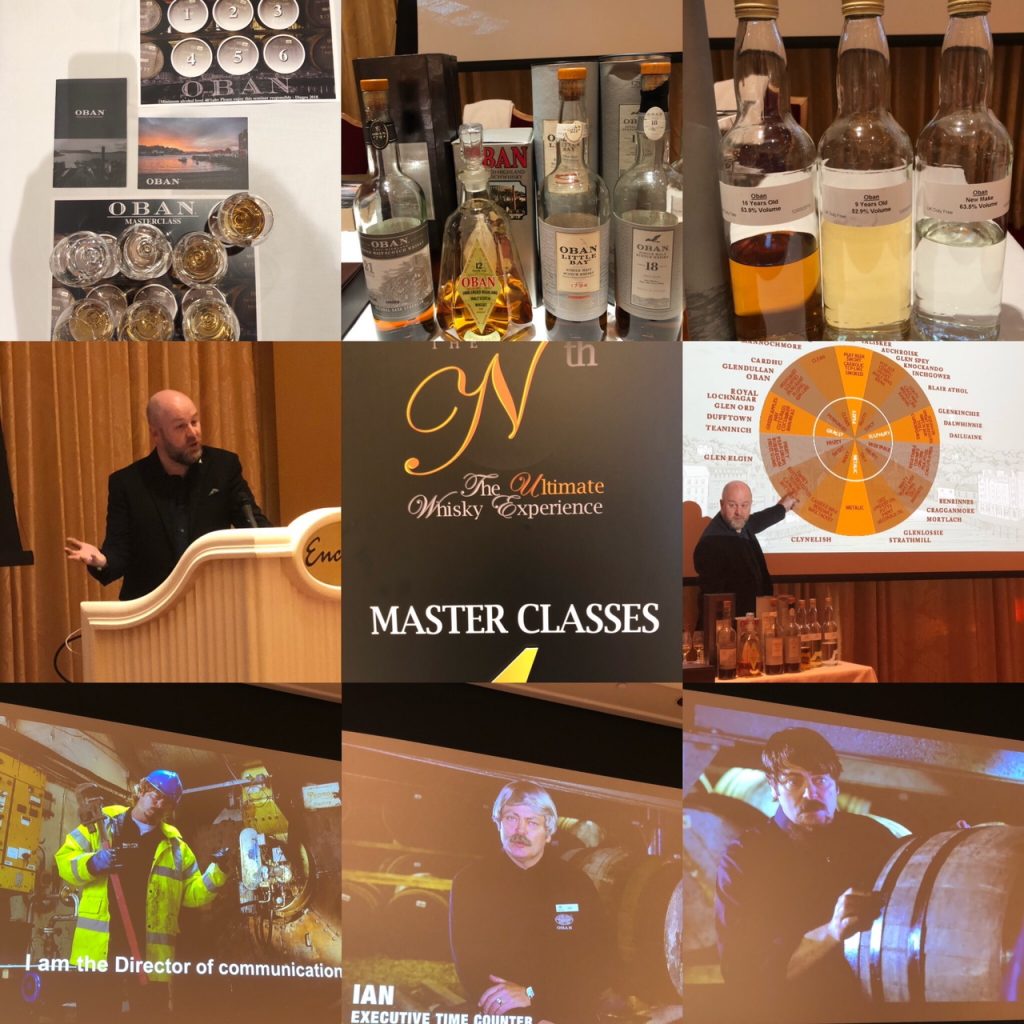 So that’s it. If you want to have some more fun Google Nick Offerman at Oban Distillery on You Tube. He tells the story of how only seven employees run the distillery – in quite a different way than what you might expect.