Being honest, I had never heard of the town of Grantown-on-Spey in Cairngorms National Park,  known as the “gateway to the whisky trail”, until the tour company, Rabbie’s, planned for us to spend two nights there. But by the time we checked out…we had also checked out the local real estate office…there was something magical about this quaint Scottish town. 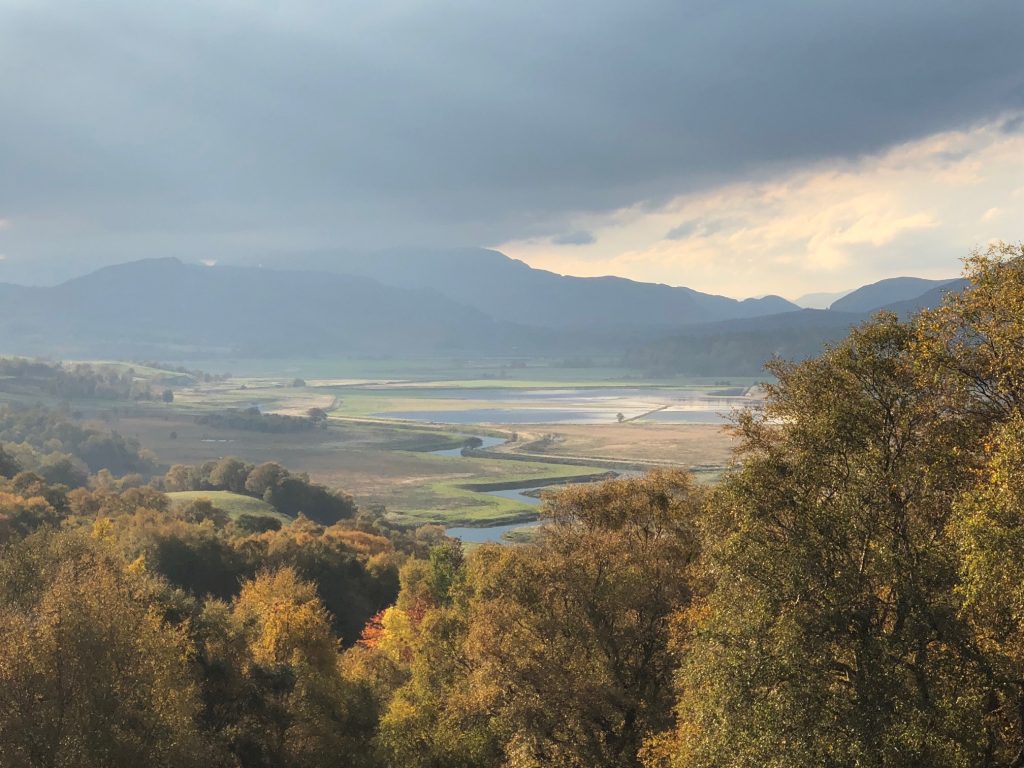 One of the many photos I shot…I’ll never forget this view.

The comfy and inviting B and B we stayed in was the Garden Park Guest House that I’ve learned was built in 1863. We had a lovely room for two upstairs, a welcoming host, a menu with traditional UK foods for our breakfasts, and it was a short walking distance past small homes to restaurants, shops, a market and ATM.

When we took our evening walks we also noticed a very grand hotel with a stone front and an expansive dining room that looked even older than our B and B. This may be one to check out in the future: The Grant Arms Hotel.

Even though it was very chilly and windy we walked alongside with many locals not concerned with the weather at all, and we found ourselves quite comfortable. The two dinners we had there were the best I had in Scotland, even after a couple of great dinners in Edinburgh, the food and the charm of Grantown-on-Spey ruled out all others.

When we entered The Wee Puffin, a wee small restaurant by most standards, we didn’t have any high hopes. It wasn’t very busy, we thought, until we noticed that almost every table had a “Reserved” sign. A large party of local ladies, in to celebrate a retirement, took over the entire back section. I thought we better order before they did and I quickly asked for Bangers and Mash. (This is something I’ve enjoyed locally at Rose and Crown.)

However, the owner wouldn’t let me get off so easily. He chatted with us for a bit, wanted to know where we were from, wanted to talk me into trying haggis (no) and then order a split bottle of single malt whisky (never bought a half bottle at a restaurant before, so that was a definite yes) and then we waited…for about two minutes. He came back with the chilled whisky, a new brand, the local Spey Tenne Single Malt that had been finished in tawny port casks. It was delightful. (We later took the near-empty bottle home to our room to enjoy one last dram before bed.)

When my food came I made swift work of it; lots of yummy flavors in both the potatoes and the sausages. While enjoying my dinner with the whisky, people that were in our tour had come in and chatted with us for a bit, while even more others had to be satisfied with just a look from the outside. It just left me with a very satisfied feeling. When I got back home and went online to “like” their Facebook page I learned that they recently added The Wee Birdie as a business inside the restaurant, for whisky purchases. More reasons to return.

The other people in our tour, and our guide Al, went on and on about some old place in town and their “Pies and Chips” only menu: The Craig Bar. Finally, when one rated their pies a 9.5 put of 10 we thought we’d give it a try. (I was afraid of “pies” as I had one in England decades ago and I was sick immediately afterwards.)

The Craig Bar looked like a hangout for old airplane fighter pilots with lots of military memorabilia, though the non-descript look of the building on the outside gave no hint to the warm and antique-y interior. The owner, I presumed this as she sat on a couch near a fireplace on one side of the two-roomed restaurant, took me behind the bar to select that night’s dram. I was smitten with her attentiveness and ease. The menu, all of about eight choices, and I still had difficulty. I chose a vegetarian option with local cheese and vegetables, and it was the most delicious savory pie I had ever had. We lingered, talking to locals, listening to locals, learning from locals…why this was also a place to linger and to want to return to.

Stay tuned for Part 3, the WHISKY, next week right here. Here’s your teaser:

~ Dunkeld and the Hermitage

A warm welcome awaits you in Speyside, home to around half of Scotland’s malt whisky distilleries. Your three day adventure allows you to sit back and

let us do the driving whilst you visit some of the finest whisky distilleries in Scotland and enjoy the magnificent scenery of the Cairngorms, Speyside and

Stay 2 nights in Grantown-on-Spey in the Cairngorms National Park.