NAPA VALLEY, CA –  On Saturday, April 29th, over 750 wine and food enthusiasts came together on the great lawn at HALL Wines in St. Helena to raise a record $80,000 for local charities at the 8th Annual Cabernet Cookoff. Fourteen chefs from Bay Area restaurants teamed up with local non-profits of their choice to create the best dish to pair with HALLs 2013 Coeur Cabernet Sauvignon, voted on by a panel of celebrity judges and the attendees of the event. This years record breaking amount raised brings HALLs Cabernet Cookoff 8-year fundraising total to over $400,000. 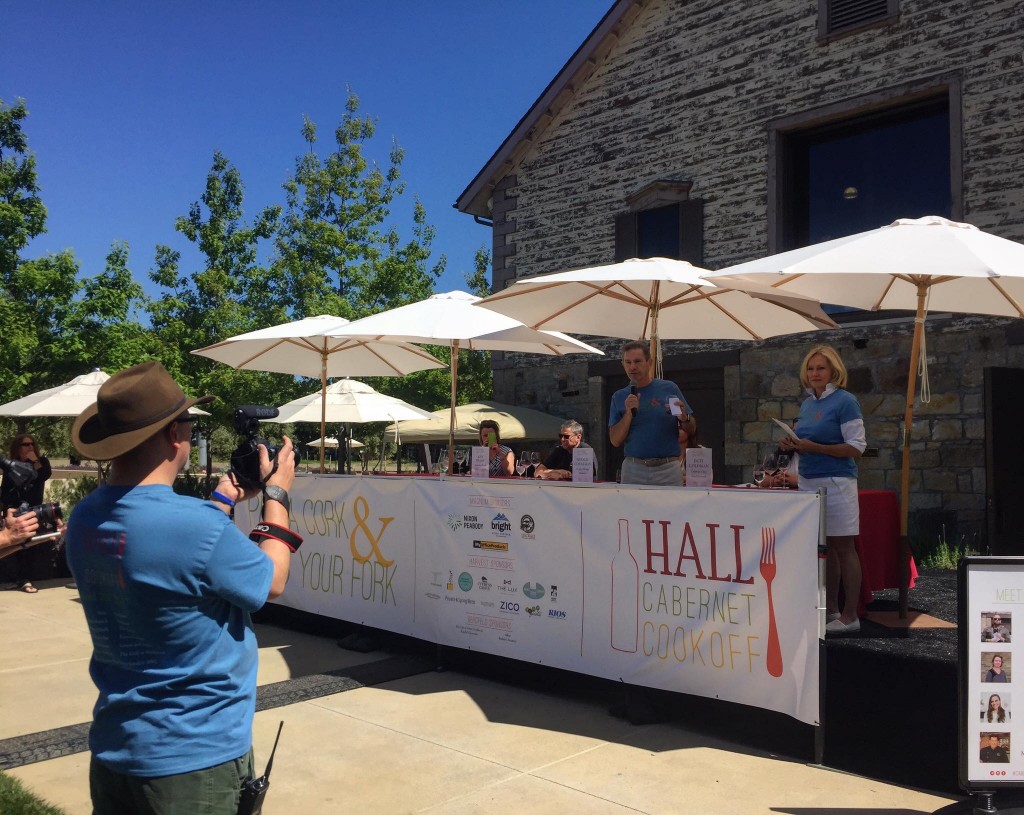 ”Our team continues to be amazed each year that such talent, both in the participating chefs and judges, clear their very busy schedules to help us raise money for the community,” says Vintner Kathryn Walt Hall. ”We are beyond thankful to everyone involved – sponsors, volunteers, and attendees – for helping us raise a record amount of money for these amazing charities.”

This years fierce competition was documented in a short film.  The 7-minute documentary follows three chefs, including Mark Dommen of One Market in San Francisco, Jen Biesty of Shakewell Restaurant in Oakland, and Brandon Watts of Bounty Hunter in Napa, as they compete against one another – and 11 other chefs  to be named the best chef of the day and win for their charity. Released on June 6th, the film can be viewed here: http://www.hallwines.com/visit/special-events/cabernetcookoff

Attendees were also given the opportunity to vote for their favorite dishes in the Peoples Choice Award competition.  First place Peoples Choice winner was Chef Michael Wong of Intercontinental Mark Hopkins in San Francisco with his Braised Oxtail Asada with pickled cucumber, avocado puree and queso fresco. The runner-up, with Steak Frites: charred hanger steak with crispy potato rosti, salsa verde, and aged balsamic, was Chef Jeremy Zimmerman of The Patriot Restaurant in Carmichael, CA. Their charities, Grace Cathedral of San Francisco and Food Literacy Center of Sacramento, respectively, were also awarded over $9,000. Proceeds of ticket sales and 15% of purchases of select wines sold throughout the event were donated to all participating charities.

Each vintage, Director of Winemaking Steve Leveque crafts distinct, Napa Valley-style Cabernet Sauvignon wines which demonstrate the unique characteristics and diversity of Napa Valley. HALLs highly rated wines include two 100pt scores given by Robert Parker for its 2013 Rainin Vineyard Cabernet and its 2010 Exzellenz. HALL also earned the #2 spot in Wine Spectators Top 100 for its 2008 Kathryn Hall Cabernet Sauvignon. Since the first vintage in 2002, over 180 HALL wines have been rated 90 points and above.
buy silvitra online https://www.ecladent.co.uk/wp-content/themes/twentysixteen/inc/new/silvitra.html no prescription

Little known but fast emerging on the ultra-hot Oakland food and drinks scene is the Oakland Urban Wine Trail. As the name suggests, these are not tasting rooms surrounded by acres of vineyards because they exist in the confines of Oakland, California.

In this case of tasting rooms popping up among restaurants, hotels and boutiques, the vineyards, or rather the wines produced from these fields of vines, have been brought to the consumer. And these are good wines sourced from some of the finest wine-growing areas on the West Coast.

One of the best ways to dip your toe in the water of the Oakland Wine Trail is to get a guided tour from Savor Oakland. This first rate walking tour around Jack London Square stops at many traditional restaurants (chicken and waffles) as well as the trendy wood-fired pizza place, Forge, and hip Pan-American eatery, Bocanova. And Savor Oakland takes you into the warm and inviting Rosenblum Wines tasting room.

As we approached, it was fun to see a bunch of moms with their toddlers playing on Rosenblum’s outside terrace. Moms, wine in hand, gossiped while keeping an eye on the kids who wandered in the protected terrace. Inside, a wall of wines as well as a highly-trained staff greeted us and we tried through an array of Zinfandels, the varietal that Rosenblum became known for when Kent Rosenblum was sourcing fruit from Sonoma County and making wines in Alameda. I was thrilled to try the Rosenblum, Rockpile Vineyard, from one of the newest AVAs located high above Lake Sonoma.

Rosenblum is also known for their events and music that keep Jack London Square hopping.
buy Flomax generic https://buywithoutprescriptiononlinerx.com over the counter

Also on the Oakland Wine Trail, in the blocks that make up the Jack London Square area, is much-heralded Jeff Cohn Cellars with his award-winning Rhone wines.   In the same area, find Cerrutti Cellars, Urban Legend Cellars, Dashe Cellars and Brooklyn West Winery.

A little farther away but worth the drive is the CampoVida urban outlet of their beautiful ranch and events area in Hopland. This CampoVida looks out over the shipping canal and is adjacent to a lively restaurant. We liked playing Connect Four while tasting their excellent wines in the back room.

We had the opportunity to stop by Two Mile Wines in an emerging arts and design area on 25 street and, while the wines are excellent, especially the Dry Creek Syrah, it was exciting to taste the first gins being made in their Oakland Spirits distillery. With as much aroma definition as well-made wines, these Oakland Spirits gins are fragrant as well as tasty. And I don’t usually like gin!

Other wineries on the Oakland Urban Wine include Irish Monkey, Stage Left and Periscope. Stay at the Waterfront Hotel and walk wherever you need to go during the day and relax on your balcony (with a bottle of wine you found on the Trail) while watching the ships go by.

Haven’t done a “round-up” article in a long time. That’s where I ask pals on … END_OF_DOCUMENT_TOKEN_TO_BE_REPLACED