This year’s festival will feature world-renowned contemporary R&B artist and hitmaker Robin Thicke in Atlanta, Houston, and D.C.; Grammy Award-winning singer-songwriter and actress Mýa in Houston and Chicago; hip-hop legend DJ Jazzy Jeff in Atlanta, Houston, and D.C.; and Grammy-nominated singer-songwriter and producer Tamia in D.C.; among others.
Founded in 2018, the picnic-style event has garnered national attention through previous years’ music lineups, which featured prominent artists like Lupe Fiasco, Estelle, DJ Cassidy, Marian Hill, and more, as well as the high fashion, Instagram-worthy photo installations, VIP experiences, and culinary offerings from celebrity chefs like Wolfgang Puck and Kelis that attendees have come to expect.
The festival will be making its third appearance in both the Atlanta and D.C. markets and debuting for the first time in two new cities, Houston and Chicago, in 2022.
“Since the event’s inception, we’ve continued to improve the experience and music for our guests, and this year will be no different,” said Cleveland Spears, III, founder of Célébrez en Rosé. “Music is a huge part of that experience, and I’m proud to say that there will truly be something for everyone at each of the four Célébrez en Rosé events in 2022. We look forward to being back in D.C. and Atlanta with a few new and exciting surprises in store, and introducing our new audiences in Chicago and Houston to a rosé all day experience like nothing they’ve seen before.”
Célébrez en Rosé (French for “Celebrate in Pink”) has continued to grow in popularity and attendance since it launched four years ago under the name of La Fête du Rosé in Atlanta. The festival sold out its second annual appearance in Atlanta and inaugural event in D.C. the following year, attracting thousands of attendees dressed in their finest pink and white summer attire. Watch the official recap of last year’s Célébrez en Rosé event in D.C. here.
Additional local acts and a full entertainment lineup will be announced in the coming weeks, paying homage to the unique cultures and audiences of each of the four cities.
For more information or to purchase tickets, visit celebrezenrose.com.

We have a “wine night” with friends pretty frequently and it recently dawned on me that I’ve never written about how that works.

For some, or even most of you, you have some experience with this: you invite pals over, everyone brings a bottle or two to share over dinner, and you talk about the wines – why you chose them and how they fared during the evening. This blog post is to remind those with experience how to make it enjoyable for the newbie guest, and the how-to for a newbie host. 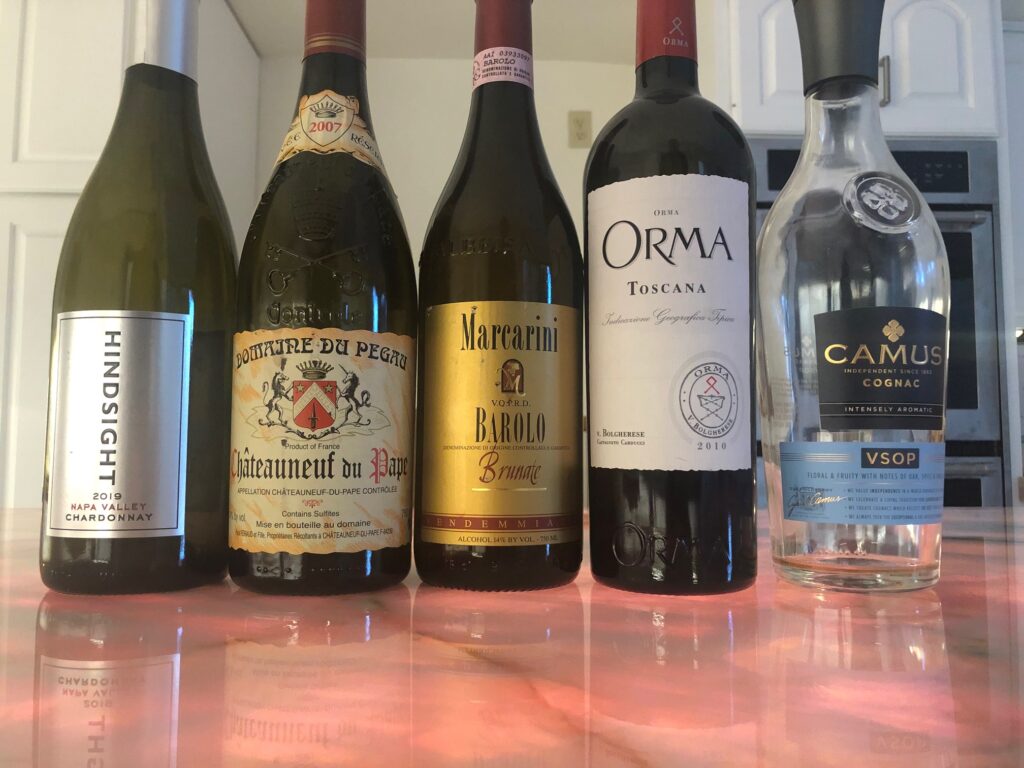 This one wine night I will use as an example is described a bit in this social media post: How was your last Wine Night with friends? We recently shared a 2019 Napa Hindsight Chardonnay that was new to me and Chablis-like due to its fresh fruit and no noticeable oak, then came the Grenache we mistook for Syrah or Mourvedre in a 2007 Domaine Du Pegau Chateauneuf Du Pape, a masterfully balanced 2000 Marcarini Brunate Barolo with dinner that benefitted from 6 hours of decanting, and two I was too tired to taste: 2010 Orma Super Tuscan and Camus VSOP Cognac. If I had to pick a favorite of the night it would be hard as the ones I had were all so good for many different reasons.

Now the details to help our wine 101ers:

Let your guests know what your menu is so they can bring a wine (or two) that they believe will be appropriate for pairing.

Always have a white to start. I’m amazed at how many people prefer sparkling, white or pink wines in general; so having at least one leaves no one out.

Decant any wine, in this case it was the Barolo, if you know requires it due to its youth or older age. Decanting allows more air to envelop a wine that needs to “open up” a bit before drinking. If you’re not sure, taste the wine before you serve it to guests. If it’s tight or tart decant it. You can also search the Internet for the same wine (same vintage year too) and see what others recommend.

Serve appetizers as well as a main course during your evening. Drinking wine without food causes early inebriation so having some starters helps. And as this may be when you are drinking your white wine, serve with cheeses, nuts, and crackers – nothing too big – unless you will be moving onto reds. If you do that before dinner then add in the charcuterie. Some wine people like charcuterie with whites too, it’s not my preference, but as in my recommendation for decanting – taste your food with your wine to educate your palate and form your own opinion.

When you do move onto reds you can do it a couple of different ways. Serve the lower alcohol wines first and move up the bigger ones last. You can decide what is served first depending on the menu. Big wine with big food. In this case we had the Barolo with a lasagna dinner, the Rhone that was more Grenache-based just before, and the Napa Chardonnay first. The Super Tuscan came at the end of the meal and the Cognac came last.

One other note on the order of the wines. If you have an amazing wine to share consider serving it early on in the evening. I had “palate fatigue” and couldn’t taste the final Super Tuscan or enjoy the Cognac, and I may have missed out.

Lastly, encourage your guests to taste each wine before committing to a full glass. That way if it isn’t their “cup of tea” they can move onto something else that is. I like to have at least two bottles open at a time to give guests that option.

NEW YORK (PRWEB) – While many think Rosé is largely a French invention that started in Provence, Italian “Vini Rosa” (Pink Wines) have a long tradition behind them. They are among the most diverse rosé wines in the world in terms of color and grape varieties. One can find wines with a pale pink onion skin color, going through to salmon color, and then onto the darker tones of rosé. 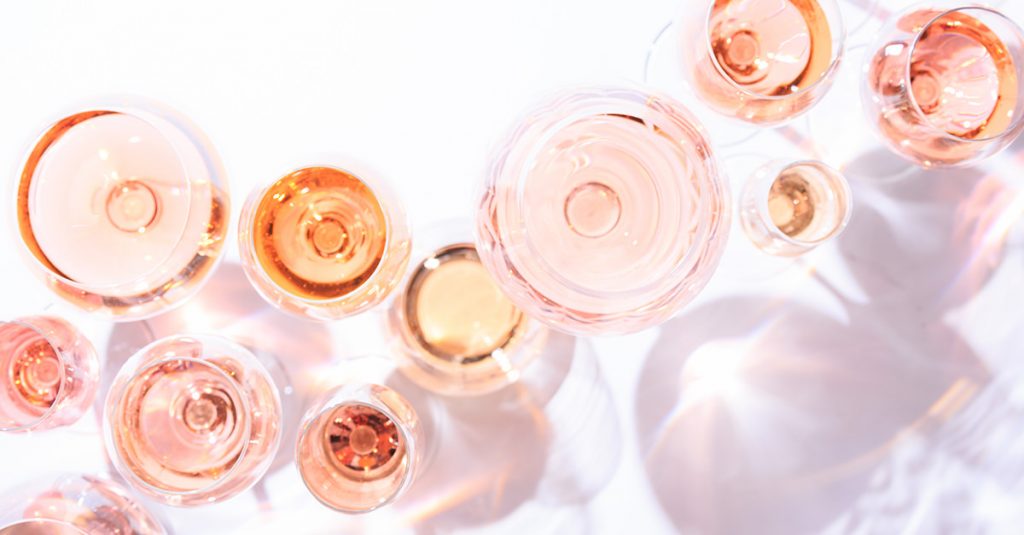 The wines come from a host of indigenous or native grapes and can be made using a few different methods. Some are done only using direct press, others with what is known as the saignee method – the bleeding off of the juice after a shorter maceration than used in red winemaking.

While there is a lot of variation, what they tend to have in common is that these are food friendly wines, like most other Italian wines. They almost always have pronounced acidity and freshness. They are usually paired with local fare but can be enjoyed on their own, and they are perfect year long.

Some areas in Italy that have always been known for their “Vini Rosa” include Puglia and Calabria, where the rosé is called Rosato; Veneto and Lombardy, where the name for the rosé is Chiaretto; and Abruzzo, where Cerasuolo is produced. In Northern Italy, in the Lake Garda Region, the Chiaretto tradition dates back to Roman times, while Rosatos from Southern Italy have ancient Greek traditions. Trentino-Alto Adige and Tuscany also have Rosato traditions on a smaller scale.

No discussion would be complete without mentioning the world of bubbles in Italy and the new Prosecco DOC Rose style that entered the market last year. What’s old is new because Pinot Noir has grown on the hills of the province of Treviso for decades. Sparkling rosé can also be found in Franciacorta DOCGs, Oltrepò Pavese DOCG, and Trento DOC, three areas renowned for their sparkling wines.

Delightful wines made from indigenous grapes throughout Italy are ready for discovery.

The program: European quality wines: taste the difference is a project financed by the European Union and managed by Unione Italiana Vini and PRODECA for the promotion of PDO and PGI European wines abroad in China and US. In order to achieve this objective, the TTD.EU program will organize wine seminars, workshops and b2b meetings both in these countries and in Spain and Italy, inviting wine professionals to join study trips to Europe.

The program, realized in the span of three years (2021-2023) aims at creating awareness about European quality wines, in particular Italian and Spanish, which share a long tradition and a high standard of quality.