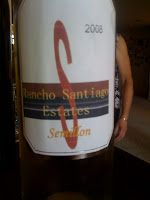 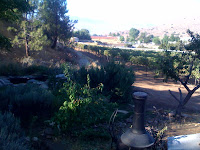 “You survived a morning in a vineyard, remember to keep your clippers on your side of the grape vine and nobody gets hurt! We had a great time. PS I drank your portion of wine. Thanks for leaving early.” Cathy, local winemaker.
How did this happen you ask? Facebook and now real friend Mary live-chatted to me yesterday, “Where are you going this weekend?” Well, besides supporting New Moon Valencia’s Fundraiser where $1 of every cocktail served this past Friday and Saturday nights went to the Firemen’s Memorial Fund…not much.
So, she suggested I get up at 4 am (gotta blog first!) to get to Acton by 6:30 am to help with DiMaggio Washington’s harvest at Rancho Santiago. Gee, now that was something I hadn’t done before, so in the name of “blogger to all things wine in my valley” I felt compelled to comply.
DiMaggio, who I had met a couple of years ago, interviewed for the newspaper and then met once every month or so over coffee, has a few bazillion acres that I knew he spent several hours a day maintaining…what was a few from this wine 101er?
Or, what kind of damage could I do in a few scant hours to one vineyard?
I bought gloves, and some food to share, the two requirements mentioned in the invite. Multi-tasking, I got both at the Smart & Final opposite New Moon.
When I arrived, on time to get a great parking space, no one met me at the door. I heard music coming from the vineyard. 6:30 am and this was okay in Acton? What in vineyard-hell had I gotten myself into? Where was my croissant? My coffee? My…gulp…own bucket?
Meeting other friends – well not friends exactly but DiMaggio’s students that should have been getting a unit, or two, out of the event – were already at work. It was quickly explained to me where to snip, drop and then move my bod to.
Not so easy. Mary and Cathy lead me to the “Verboten…Port” rows that were to be harvested later. As they head up, and I head down – there were Bees, other flying buzzing things, and talk of snakes that only Steve, 10 rows away, could handle – one of DiMaggio’s friends waved us down. The sign had fallen down, lost amongst vines and fruit, we had been pruning the wrong section.
And suddenly, just I was planning my escape, it was already 8:30am. Someone called out ,”We’re done!” My pink shirt was brown. My leather gloves soaked through. Nothing to watch but the giant de-stemmer and the biceps it took to clean it. Apparently we had run out of storage space for more grapes. I silently thanked my personal Bacchus Wine God for saving me from more manual labor.
At 8:35am someone cracked open the Ralph’s donut holes, 8:50 the homemade and store-bought cheeseballs made their appearance, 9:15 DiMaggio finished outside and started to marinade huge slabs of beef and by 9:30 6 bottles of wine had been devoured.
I met up again with fellow writer, Russ Briley from Ventura, who lived locally in Castaic. It was fun to chat about how we get paid in wine and events and would do this even if the day jobs, that supported this habit, were removed. Cathy and Mary took some group photos (see below) and promised more to come…
I hung in there, as I had to for my job, until…10:30am. They went until 7pm as Cathy said above. But I got a nap and a shower in when I got home…and can at least say that I have harvested grapes…once. Never again will I ever dream of owning a winery. I’d be happy with a winery tasting room and several farmers/students of wine at the real helm.
(DiMaggio Washington, certified sommelier, instructor and wine maker, is bringing his World Wine Education courses to TPC Valencia. Join him for instruction or simply entertainment. Most classes will be held in the The Oaks Grille restaurant inside TPC. Pairing dinners are created by Chef Daniel Otto. http://worldwineeducation.com/ Office: 310-720-5401)