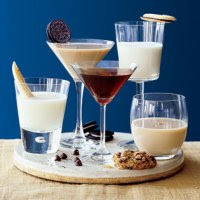 Tamar Verrone was one of my first Facebook Wine 101 friends. I met her in person when she came to support my church fundraiser at Valencia Wine Company this past May. When she invited me to her holiday party I thought it sounded…interesting.

In reading the invite alone, a party for pairing cookies with cocktails, I knew that I was going to have to check it out. Not what I would have “concocted” for a party myself, but, as my Internet audience is younger than my former newspaper audience, I was more than willing to give this a try. Aw, the life of a journalist always on the lookout for a story to break.

I messaged her, on Facebook of course, a few questions about this latest drink party incarnation:

What gave you the idea for a cookie party Tamar? “I wanted to have a “cookie exchange” with some of my girlfriends, then they wanted to invite boyfriends and have some wine, then all of a sudden I just came up with the name and decided to have a big party!”

What have you got planned? “I tried renting out my Bridgeport Clubhouse, and a few others around town, but it was too late…they were all taken for Saturday. So I called my friend Robbie at A-1 Party Rentals and he set up a tent in my backyard yesterday!”

Have you done this kind of thing before? “I have never done this before…so this is the First Annual Cookies and Cocktails Celebration. Depending on the turnout, I will most likely rent out a larger venue next year!”

Give us a shameless plug about yourself, Tamar, all I know about you is that you’re local realtor. “I am now with Keller Williams VIP Properties and am going to be opening an office at the Valencia Car Wash on Creekside behind Target. I am busy planning that, as well as working with buyers and sellers all week long. (I just listed a 4 bedroom home in Bridgeport for $429,900 if you know anyone interested!) I have an assistant, Lisa, a marketing director, Arcy, and a buyer’s agent, Jeanine who all just started with me to help 2010 be a fabulous year! I am also a single mother with two beautiful boys, Jordan, age 11 and Shane, age 7. Between basketball tournaments every weekend to open houses to throwing parties, I am very busy!”

It turned out to be that night last week where we SCVians were dealing with a rare rainstorm. And, as we had two parties that night, we braved the wet roads to our local lake in Bridgeport to find Tamra’s home still above water a little after 6pm.

We were met by two women at the door, neither was our host, and asked to pose for pictures against a black curtained backdrop placed in Tamra’s entry hall. (As this is the age of cell phone photos twittering party shenanigans, we were left wondering how fast these we get uploaded to Facebook.)

In the dining room we were handed an “Oatmeal Cookie” made with both Cinnamon and Butterscotch Schnapps, Jagermeister and Baileys. I paired mine with bottled water. But, the array of appetizers brought by friends, were as fine as found at any good party.

The “think Vegas” dress translated well for Tamra’s friends, all of which were as lovely as any Vegas showgirl. The menfolk were very easy on the eyes as well. (Again, I thought that being the age of instant Internet access, people dressed with more care nowadays, never knowing if and when a photo would be snapped and sent out into the universe.)

When Tamra came downstairs she greeted, and spent time with, all of her early bird guests. She handed me the next concoction, at press time I don’t have all of the ingredients, but Malibu Rum, Midori Melon Liqueur and Pineapple juice were definitely leaving more than a trace on my palate.

The “pairing” for this drink was chips and guac for me. Being that some guests brought the mixin’s for their signature cocktails, while others brought their favorite cookies, it was up to each as to what they’d like to pair. That seemed a fine way to do it to me too. I certainly would’ve been hard-pressed to answer any pairing questions!

From there we tested the dance floor, kept dry with tent and carpeted flooring in Tamra’s rear garden. I danced one Michael Jackson song in a circle of Tamra and her pals, took a few photos of my own for Twitter, found a nice glass of the Cambria Pinot Noir I had brought and popped a teensy square of brownie into my yapper. I heard the rain let up a bit, thanked Tamra for the invite, and made my early exit as planned. But I did wonder, as I passed a throng of lovelies on the walkway, how lucky I was to be part of such a sweet pairing.

THE UNIVERSAL WHISKY EXPERIENCE PRESENTS TO YOU: The World’s Premier Luxury … END_OF_DOCUMENT_TOKEN_TO_BE_REPLACED