(Update: Use promo code “bogo” you’ll get two tickets for the price of one for the Oktoberfest Saturday night.)

It was a uniquely cool experience seeing the parking lot of our mall being transformed a little every day as Belgium workers that flew in took to the task of erecting our first Spiegeltent this October.

Spiegeltents (Dutch for “Mirror Tents”) were large wooden travelling tents that originated in Belgium during the late nineteenth century, and soon became popular entertainment venues during the early twentieth century. They were made from wood and canvas and were designed to be pulled down and moved. They were mostly utilized as travelling entertainment saloons, but at times were also used as bars and dance halls. 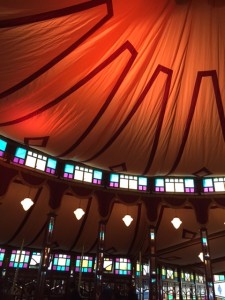 After the end of the First World War the western world saw an economic boom which was marked by increased earnings and therefore increased spending on leisure activities including entertainment. As the middle class grew more money was spent on the middle class entertainment that the spiegeltents provided and therefore its popularity grew, peaking in the 1920s and 1930s.

With their lavishly carved wooden interiors that were covered in mirrors, their stained glass windows, velvet and brocade upholstered seating booths and their old-style bars, spiegeltents reveal the decadence of an era long gone. It’s easy to imagine what they would have been like in their heyday: dark smoky entertainment venues where people of all ages went to view light entertainment such as vaudeville and cabaret, whilst later in the night others went to indulge in the pleasures of burlesque…(Read more: http://digitaleditions.dlook.com.au/2013/01/vaudeville-cabaret-and-burlesque)

From out-of-the-box visionary Peter Goossens, Goose on the Loose Productions, the Spiegeltent was ours. This is how the first night went:

Sours, Ales, Beers and a Little Vino Too

I enjoyed the Val-Dieu Triple, Brasserie des Roc Grand Cru, Cosendonk Ale, Hoegaarden Blanche, Hommel Ale, Seef beer, Lozen Boer Abbey-Style Ale, Omer Traditional blonde, my usual favorite: Paqwel Kwak and discovered a new Paso Robles winery: Volatus. I did try a sour and was told to give it at least three tries before giving up, I did. Will try that again next year when my palate is more educated! 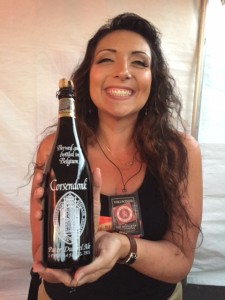 We attend a lot of events and volunteer pourers are always a necessity. What isn’t is that they have knowledge about what they are serving. What a wonderful experience we had with every server at the fest! When I asked how they knew so much one said she read the bottle labels in advance, another mentioned that information sheets were provided. It sure did a lot more to serve the event, and the brands themselves, by having volunteers show a true interest. Bravo.

There were lots of people enjoying a little elbow room as they traveled from one table to another, politely waiting their turns to taste. There was so much to try I was curious…did anyone do it all? There were pour out buckets (and water for rinsing glasses) so you didn’t have to finish each and every generous pour you got, so I guess it was possible to have it all!

Inside the tent was a ring of cozy booths, and tables set up for large parties, and only the small circular inside section, that housed the bar, was roped off for VIPers to enjoy a full glass. Outside of the tent was more seating, if you preferred to just take short breaks and get right back into the action!

I knew the tent was inlaid with dozens of mirrors, but I didn’t know about the many colored glass windows until I was inside. As the evening progressed some of the windows were popped open, and the setting sun beautifully illuminated the closed ones. The hardwood floor, especially at its circular center, would be great for dancing and there was a DJ that put many of us in the mood. And looking up at the canvas tent itself literally took you back in time.

Just like the last two years shorts and sundresses were perfectly acceptable – it’s a casual, yet festive, event. This year there was one man in a t-shirt with a lederhosen design, a woman in full lederhosen and a group of people wearing eat-your-own-pretzel necklaces. I told you it was festive!

If you wanted a cigar they were on the end of one row (less smoke in event that way) and the photo booth was dead center and highly popular.

Salt Creek Valencia served up a hearty Guinness Stew, Cajun Chicken Pasta and Rueben Sliders. Later we learned that there was great Beef Bratwursts at the Newhall Refinery tent. And of course, I can never skip the Belgian Waffles, both chocolate and plain, provided by Belgian Accent. 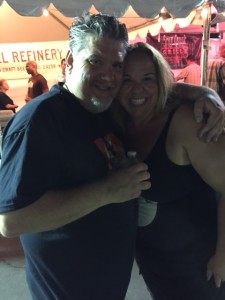 Besides the visionary Peter Goossens, and his “Thing One” (as her T-Shirt proclaimed) Claudia Sheridan, there were countless volunteers – many having worked with Peter for years. They sure made the evening flow easily and deserve our many thanks in pulling off yet another off-the-charts event. The guests I spoke to definitely appreciated the unique venue and all that was offered!

A Quote From the Goose

“The Belgians Are Coming Belgian Beer Fest was a tremendous success! We were very pleased with the reactions of the festival goers to the Spiegeltent environment, as we always strive to bring new experiences to our guests.”

Next up in the tent: Oktoberfest this Saturday night, 10/18 starting at 7pm – and the fun goes until 11pm! Don’t miss your chance to visit the tent and the beers and have your own shenanigans! http://thebelgiansarecoming.com/2014/08/oktoberfest

The KFWE is the destination for wine and food lovers alike, affording … END_OF_DOCUMENT_TOKEN_TO_BE_REPLACED