SEATTLE /PRNewswire/ — Holland America Line took home a win for “Best Beverage Menu’ for its newest onboard bar —  Half Moon Bar —  at the 2022 VIBE Vista Awards that were presented during the VIBE (Very Important Beverage Executives) conference this week in Carlsbad, California. The award spans the entire beverage industry and competition included a collection of restaurant groups, hotel chains, casinos and more. 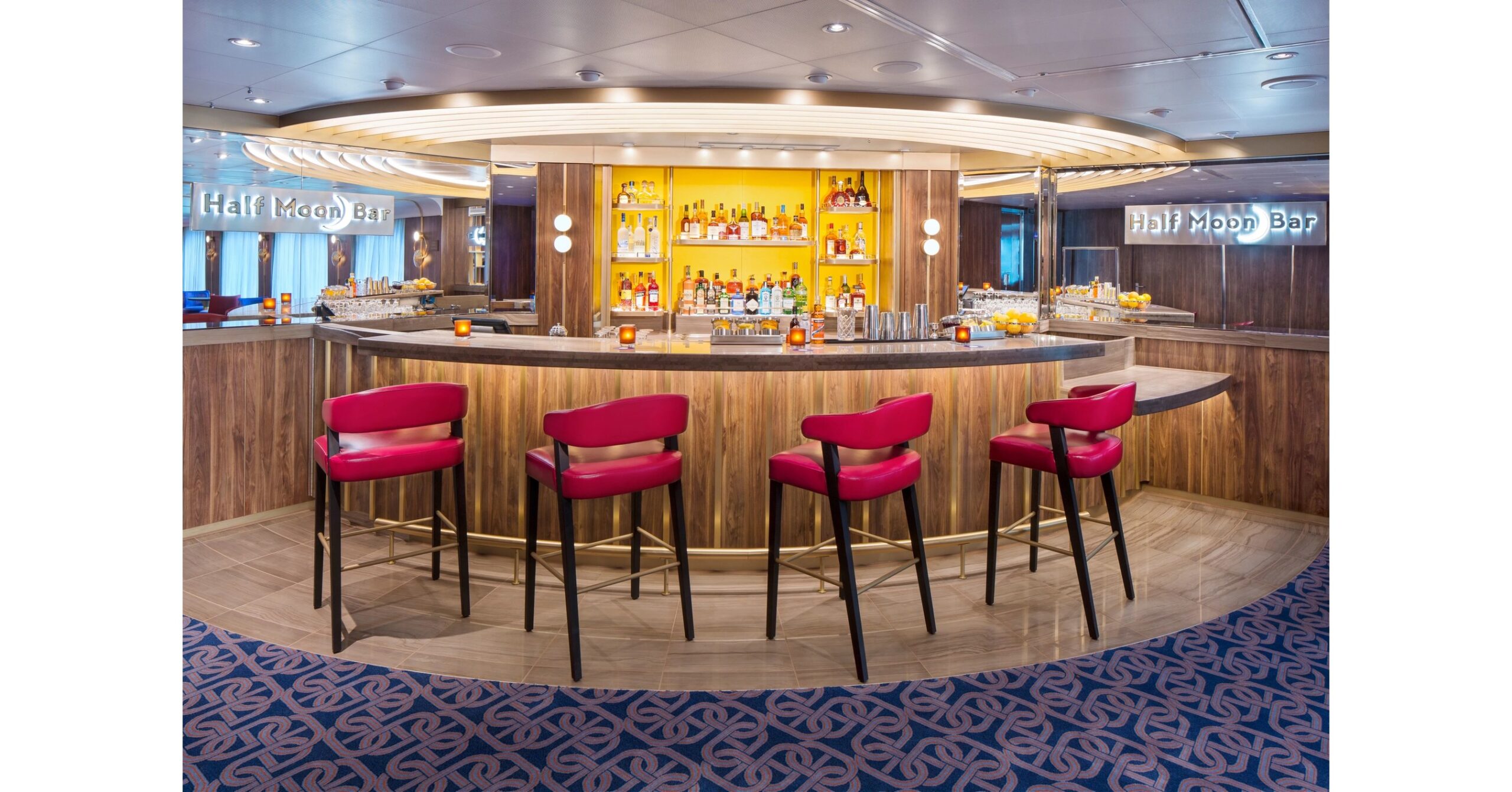 Half Moon Bar is an immersive experience looking at the history of cruising through the lens of a cocktail.

Holland America Line’s Half Moon Bar is a new concept for the brand that was exclusively introduced aboard its most recent ship, Rotterdam, which launched in November 2021. The venue is an immersive experience looking at the history of Holland America Line and cruising through the lens of a cocktail. Each drink comes with a fascinating tale of its inspiration that is vividly described in the bar menu for guests to peruse.

“Holland America Line has a rich history of nearly 150 years, and with Half Moon Bar on Rotterdam we wanted to create a bar concept that celebrates our story with an immersive menu, and it’s quickly become the most popular bar on board,” said Michael Smith, senior vice president, guest experience and product development for the cruise line. “We are honored to be named best beverage menu for Half Moon Bar, selected from across the beverage industry, and we thank the panel from Johnson & Wales University for recognizing our commitment to giving our guests an exceptional experience.”

The creative cocktails at Half Moon Bar aim to take guests back in time, on a journey though Holland America Line’s history. Drinks on the menu include:

The VIBE Vista Awards recognize the top performers in the beverage industry through the creation, training, execution, management and on-going positive results of beverage programs. Entries were reviewed by a panel of Johnson & Wales University beverage faculty, staff and alumni and were judged on positive beverage sales initiatives, efficient operational innovations and training and service programs producing high quality standards. VIBE Conference is the premier annual event for chain and hotel adult beverage executives and suppliers.

About Holland America Line [a division of Carnival Corporation and plc (NYSE:  CCL and CUK)]
Holland America Line has been exploring the world since 1873 and was the first cruise line to offer adventures to Alaska and the Yukon nearly 75 years ago. Its fleet of premium ships visits nearly 400 ports in 114 countries around the world, offering an ideal mid-sized ship experience. A third Pinnacle-class ship, Rotterdam, joined the fleet in July 2021.

We’ve tasted wines from Jeff Cohn Cellars many times, but always at events, where the wines were poured by Jeff or his wife, Alexandra. We had never had an opportunity to sit down and taste through the lineup with Jeff and hear the full story. 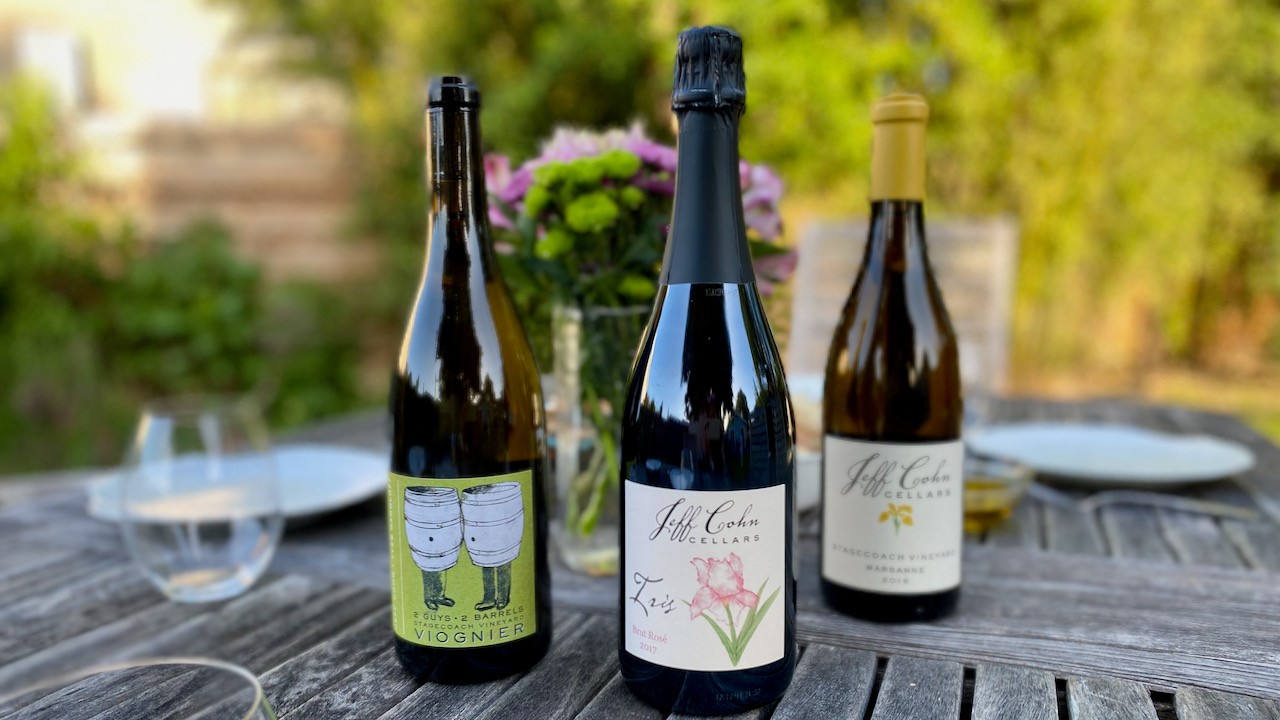 We finally were able meet with Jeff at their recently opened tasting room in Healdsburg. You can read all about Jeff Cohn Cellars on the website here www.jeffcohncellars.com/about-our-story but ultimately, it turns out that their story is a multi-faceted love story.

First and foremost, the love story of Jeff Cohn Cellars is about Alexandra and Jeff and their family. They met while they were both working at the Hyatt Regency Crystal City in Virginia – Jeff was F&B Cost Controller and Alexandra was an accounting trainee. Coincidentally, they had both also attended Florida International University. Alexandra’s career path took her back to Florida and Jeff joined her there, working on cruise ships for two years. But being in the hospitality industry often means being bitten by the wine bug and eventually, they moved to California. Jeff had already worked as an intern at Boordy Vineyards in Maryland but during the process of obtaining his Master’s in Agricultural Chemistry at Cal State Fresno, he discovered French techniques as well as the wines of the Northern and Southern Rhone plus Zinfandel. The rest was history.

It is also apparent the love that Jeff has for his colleagues and mentors, both former and current, most notably the late Kent Rosenblum. Jeff went to work for Kent at Rosenblum Cellars after graduating from CSUF, moving up the line to eventually become winemaker and then vice president of winemaking and production. He left in 2006 to focus on Jeff Cohn Cellars [then called JC Cellars] which he had founded in 1996, but not before making his permanent mark on the wine world by having Rosenblum’s 2003 Rockpile Road Zinfandel hit #3 on the Wine Spectator Top 100 list.

Finally, and certainly not least, is Jeff’s love of wine grapes, particularly, as mentioned above, Rhones and Zins.

So yes, we are finally getting to what we tasted –

2017 Iris Sparkling Brut Rose – named after Jeff’s beloved mother, this delicious bubbly is a blend of 60% Grenache (Rossi Ranch), 20% Syrah (Rockpile) and 20% Mourvedre (Rossi Ranch). Modeled after the wines from the France’s Tavel region, Karen picked up notes of Persimmon.

2016 Stagecoach Marsanne – 85% Marsanne, 15% Roussanne. The last wine we tasted was a white. We asked Jeff why other wineries pour their whites first and he said “because they are doing it wrong.” Seriously though, white wines poured at the beginning of a tasting are often forgotten by the end. We wouldn’t have forgotten this one though no matter where in the tasting it was poured. A wonderful palate brightener with delicious tropical fruits to wake up the taste buds. Crisp citrus notes and a big mouth feel. This Napa Valley vineyard was bought by Gallo a few years ago so we are not sure what the future holds for these varietals there.

Jeff Cohn makes more wines in addition to the ones we tasted.  He has many more Rhones and single vineyard Zins sourced from Sonoma, Napa and the central coast. They are definitely worth a stop when you are in Healdsburg or in the Santa Rosa area or interested in making an online purchase.

We expect you’ll love them as much as we did.

Michael and Karen Perlis have been pursuing their passion for wine for more than 30 years. They have had the good fortune of having numerous mentors to show them the way and after a couple of decades of learning about wine, attending events, visiting wineries and vineyards, and tasting as much wine as they possibly could, they had the amazing luck to meet Eve Bushman. Michael and Karen do their best to bring as much information as possible about wine to Eve’s Wine 101 faithful readers.

The KFWE is the destination for wine and food lovers alike, affording … END_OF_DOCUMENT_TOKEN_TO_BE_REPLACED