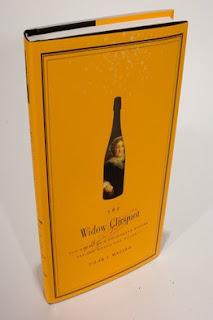 I just finished reading (actually I listened to it on audio) Mireille Guiliano’s French Women Don’t Get Fat. In capital letters below the title is this: THE SECRET OF EATING FOR PLEASURE.
The idea of a book telling me how to eat more pleasurably – than I already was – literally spoke to my decadent side. (I already know what you’re thinking: Eve has a non-decadent side?)
Guiliano gained her weight for the first time when she came to the US as an exchange student and fell in love with our chocolate chip cookies and brownies. When she went home her father let her know that she looked like a sack of potatoes and she found “Dr. Miracle” to help her. Zzzzzzzzzzzz
I don’t diet. I am not going through the redundant pains of that portion of her book. We know that Americans eat differently than the French; we’re in different countries for God’s sake. But I was interested in Guiliano’s job as CEO of Champagne giant Veuve Clicquot Inc. And I loved listening to the way her mouth seemed to fill with words rolling in and around it as she described her daily life.
I found my mouth watering for Champagne as she served it up daily with every bread-free, fat-free, mostly red-wine-free meal. She insisted that moderation is the key in food and exercise – no big surprise there. Her lunches of fresh vegetables and mussels filled me with desire to close the book – and have a 3-inch thick pastrami on rye (Thanks, Mo, for putting that picture in my brain) with more than one slim flute of her brand of Champagne.
But my interest was also in a woman conquering the wine industry. And lucky for me I was given the counterpart to Guiliano’s story written by Tilar J. Mazzeo: The Widow Clicquot. And in caps below this title was, THE STORY OF A CHAMPAGNE EMPIRE AND THE WOMAN WHO RULED IT.” (I was instantly thinking they not only had the same title editor but that EATING FOR PLEASURE with the WOMAN WHO RULED IT was going to suit me just fine.)
The flyleaf of this second book (pictured above) told me more of the story I had only read a little about in other wine books. The widow who built an empire after the French Revolution. A woman, like Guiliano, given the reigns to drive an incredibly fascinating business. One that might be most people’s vision of Champagne in general: feminine, elegant, effervescent and bubbly.
We’ve got to find a red wine that does that for those of us that want to rule with: Terror (misspelling intended), Spice and Boldness.

LOVINGSTON, Va./PRNewswire/ -- Virginia Distillery Company and members of the … END_OF_DOCUMENT_TOKEN_TO_BE_REPLACED