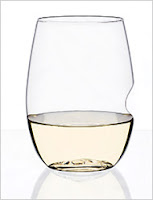 That’s really all it is, a notch above…other plastic wine glasses.
http://www.nytimes.com/2009/04/23/garden/23goods.html?_r=3&emc=eta1
A reader sent me the link but I already had the glasses. I saw them the first time at Vino 100 Valencia. Similar in feel, and weight, to Riedel’s stemless series http://www.riedel.com/ there’s just one catch as they’re not what they boast to be: Crystal.
But, I bought them anyway. The little notch fits my hand just as well my new car’s steering wheel fits. The weight, only slightly lighter than the Riedel, would be improved upon when 1/4 filled with wine. Not a problem.
Great for a picnic as when you have to set it down it will seem sturdier than glass or stemware.
But…I still haven’t used them yet. Once, many moons ago, I ordered a glass of water in a restaurant. The waitress appeared with a frosted mug….keep the frosted part in your brain here…I picked it up expecting a frosted mug to be glass but it wasn’t. They had found a way to frost a plastic mug. And said water in said mug? Down my neckline to my pants in an icy waterfall.
Forgetting for a minute, one last detail in the plastic glass argument, water = ok, wine = not ok. I predict that I’m not going to be able to swirl or sniff out of a plastic glass. But I don’t always have to do that. (Even though it’s become habit and I found myself doing it at an afternoon church meeting that was NOT about wine.)
And I refuse to leave them sitting on my shelf prettily filled with pink tissue. Winking at me from their notches. I will take them to the Hollywood Bowl…or gift them to you at your next backyard party…thereby deftly saving the pretty tissue as well, for you to re-gift.