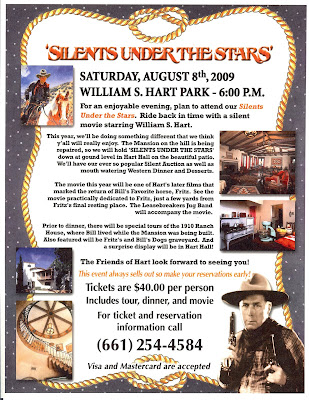 As you know, Wm. S. Hart Park is one of the oldest and most important attractions we have in Santa Clarita. Each year thousands of school children and members of our community tour the mansion and park grounds free of charge. This event supports the park and its herds of buffalo and deer, the farm animal zoo in addition to other park attractions.

This year we will be holding the event at Hart Hall with it’s fantastic garden setting. Dinner will be served on the patio and the silent movie Sand will be shown. Sand features Bill’s favorite horse Fritz in a fast riding, leaping from cliffs into the river, train robbing and the winning of the sweetheart in the end, silent movie accompanied live by the Leasebreakers Jug Band!