There were about 18 Eve Wine 101ers that night,
couples, 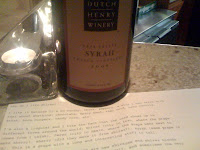 singles,
and my newly named duo: the Double Ds.

18 Shiraz or more?
with only one sparkling,
to compete against,
Paso Robles, Santa Ynez, France and what was expected and proved to be,
The Thunder from Down Under of: Australia.

One gentlemanly couple, not in our group,
hovered over glowing laptops,
a carafe,
for the full two hours of our own meeting.
And given, as a reward, 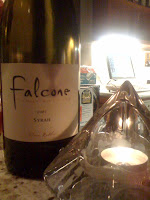 what was left of my first fave of the night: Falcone

Chatting with two Sandis or Sandies or Sandras as the case may have been,
with two handsome men at their sides,
Vic deftly pouring, helping, suggesting, asking, fitting us…like a glove.

Julie plating wedges of Brie against the tiniest of pickles, sharing her own stories, mixing her passions.
Guy working the crowd – French accent ripened for occasion,
Denise educating, as always, from a stool that should’ve been a throne.  Her prince – an arms reach away.

(My) Chef Dawn, with her husband: “The deftly discovering new descriptors Dan”.

Dellepiane named a couple, yet could be prettily pictured on a label,

Ann didn’t sing, but Mark would return her to us soon, Saturday!
Tim and Erin read this blog!  Two couples, and newly minted friends, that make me…exclaim!

and the Rust-Man, without his Tracy, collecting tasting tidbits for a column not yet ready to appear.

Grape of the Night

Well, gee, don’t know where that all came from!  But, lest you have too much Eve in one day…I e-mailed my brother for something clever to say to introduce this week’s Grape of the Night: Shiraz.  Here are his poetic words that I read aloud before we began:

I like it because it’s so earthy, thick, peppery, a wine I can drink with just about anything: chocolate, spicy food, thai food, baby carrots, steak, boca burgers, candy corn, etc.

I’m also a linguist and I like the fact that the word shows up in different forms around the world: Shiraz (city in Iran, where the grape comes from I think), Jerez (city in Spain, where the grape went next to make sherry), sherry (did they make it from shiraz?), syrah (same grape in CA). This is a grape with a long and interesting story to tell.

I like it because every year there are new shirazes and shiraz blends coming out of Australia (and other places now!), and sometimes the very best ones are incredibly cheap.

…and I like it because a close friend who died too young always urged me to try the blends.

…and I like it because my sister still likes it.