1.  You’re an LA City Firefighter, going almost 30 years, are all firefighters good cooks?  Why?
I would like to say that all firefighters are good cooks, but I have had a few bad meals at the station.
Firefighters live at the fire station for 24-hour shifts, therefore we all have to cook for each other.   Many firefighters have a couple of good recipes and can make a couple of great dishes.  However, there are some firefighters that are outstanding cooks and can make just about anything.
I think that part of the reason that they are good cooks is because of their pride.  Firefighters want to do a good job at anything they do.  Whether it is fighting a fire or cooking dinner, each one tries to do their best.  Then add a little completion, with member each trying to outdo the last meal.   They become better chefs.
2.  Tell us your first experience eating at the fire station.
My first meal at the fire station was an experience.  I was just about to graduate from the drill tower and the training captains recommended that we visit our assignment, introduce ourselves and to get our lockers.
I was assigned to a station on skid row downtown. I called, made an appointment and drove downtown.  When I arrived, the crew invited me to eat with them.  I got my locker, met the crew, got a tour of my new station and when dinner was called, we all went into the kitchen.
The members directed me to sit with everyone at long tables.  There was no silverware or plates on the table.  Then one member came by with a big pot of spaghetti and dropped a dollop in front of every member (Captains included).  The next guy came by with the sauce.  He scooped a ladle onto each pile of noodles.  When everybody had spaghetti and sauce, they all started eating, WITH THEIR FINGERS.  Nobody had silverware.  I looked around.  Everybody was acting like this is normal and they eat this way everyday.  Conversations were loud and good-natured.  I cautiously began to eat.
I wondered what kind of business I had gotten myself into.  The captains ate just like everybody else, with their fingers.  When somebody asked for the salt or bread to be passed, it was tossed.  Bread and condiments flew past my head.  Nobody took notice.
After dinner, all the members got up and one guy got a hose and just hosed off the tables.  The other members swept the water, table scraps and everything else out the door.  To say I was shocked would be an understatement.
Later, I found out that this was a common prank played on rookies.  We must also remember that this was a long time ago and now such pranks are not allowed.
3.  Tell us your first experience cooking at the fire station?
My first cooking experience at the station was a few months later.  Rookies don’t usually cook.  They have too much to do trying to learn their job.  However, rookies are expected to assist the cook with vegetable cutting, salad making and pre-meal clean up.  I had not done a lot of kitchen time prior to that.
One morning when I was almost done with my rookie year, the captain came up to me and said that it was my turn to cook.  I didn’t know how to cook a meal and I told him that.  He said that I had until 6:00 pm to learn.  I actually called my mother and asked her how to cook.
She listened to my dilemma and suggested making a pot of spaghetti.  She gave me a recipe over the phone and I did my best.  Everybody ate it and I didn’t hear any complaints.  From then on, I made a great effort to learn how the good cooks made their meals.  I have stolen more than a few recipes from good firehouse chefs.
4.  Can you enlighten readers as to the best meal you’ve ever had?
Well.  That is tough.  I’ve traveled to Europe three times, and I’d have to say it was the 5-course dinner in Nice back in the mid-eighties.  Eve and I didn’t speak French but the waiter mimed all of the dishes for us.  We had some great wine to go with it too.
At the station, the best meals are promotion or probationary dinners.  When a member gets promoted or completes their probation, they put on a fantastic meal.  Steak and lobster is not uncommon.  Members putting on the dinner will take the day off, so that they will not be interrupted by emergency calls.  Many times they bring in friends and family to assist.  When it is time to eat, all have a good time.
5.  Your recipes appear on Eve’s Wine 101 blog.  Please tell us the one you really like to make and why?
The one I get requested the most nowadays, as the couples we socialize with are mostly all carnivores that enjoy red wine, is my layered Filet Mignon.  On the bottom is a waffle made with Asigo and Parmesan cheeses and sundried tomatoes, then comes the steak, then I either use asparagus or spinach, and then a final layer of Béarnaise sauce.  On the side I might make roasted garlic and cream cheese mashed potatoes, a spinach salad with warm crumbled bacon, the drippings and grilled red onions.  For desert I’ll either make chocolate crème brulee or strawberry flambé filled crepes.
6.  Lastly, as this is a wine column, how about your favorite wine or wine experience? 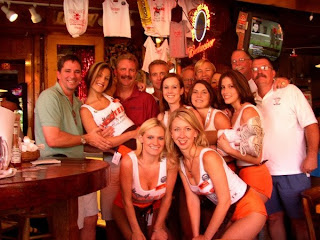 Eve and I share the same favorite wine and experience: Lynch Bages 1986, the year we were married.  May not have been the best vintage year for wine, but, as I like to say about our almost 25-year marriage: it’s from the one best year of my married life!
(My hubby is in green, here with other firefighters at Hooters.  A decidedly un-related photo…but thought you’d all like!)

MOORESTOWN, N.J./PRNewswire/ -- Wines 'Til Sold Out (WTSO) has a new kind of … END_OF_DOCUMENT_TOKEN_TO_BE_REPLACED