The music flowed like the 30 beers on tap at TributeFest last Saturday at Central Park in Santa Clarita.

I spent most of the day enjoying BASS, which is a pale ale.  I had a couple Arrogant Bastards, which is described as an aggressive Ale, a very dark like Guniness Mission Brewery from San Diego (had a very good IPA) with a very cute girl named Jessica serving them. Wonder why I had so many Mission IPA’s ?????

TributeFest General Admission tickets were $40, so it was well worth paying $60 to sample all of these different style beers.  Every beer I tried came out ice cold, with very little head on top of the cup (no glass at outdoor concerts).  The staff was very friendly, and the lines moved very quickly. I think the longest I waited for a beer was 1 minute. 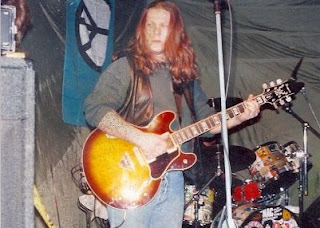 Lets not forget the the music, the OTHER part of the event.  For my concert dollar, the “WHO'” tribute band stole the show. They looked like their counterparts and sounded very close to the original.  Bon Jovi, Aerosmith, Sublime, Dave Matthews, Beatles, U2, Petty Cash tribute bands also rocked that day.

(I am a guitar player of 30 years – That’s an old pic of me on the right. I graduated from GIT in 1983, now known as Musicians Institute in Hollywood, Ca.  I buy and sell guitars internationally on EBAY, record music in my home studio, and want to get into video editing next. I maintain 2 MySpace profiles – one is personal, the other is my Artist page which features my original music. My artist link can be found at http://www.myspace.com/visafactor.  I have also developed a Guitar demo video library on Youtube, which as almost 333,000 hits and 183 subscribers. My YouTube link can be found at http://www.youtube.com/digitaldaze