I hate to…wait…I can’t say that anymore.  I’m proving to myself that I can learn to do new things.  I don’t have to always eat what my hard-working firefighter husband Eddie has time to make for me.  You know the one: Cordon Bleu classes, the never look-at-a-recipe perfect male specimen?  Why would I learn to cook?

I had some time on my hands.  I thought how hard could it be?  But then hubby suggested I use his favorite cookbook He bought at Disneyland’s New Orleans in 1984 – yes, I was there)


Over mine: That his mother bought me at the same time knowing my talents. 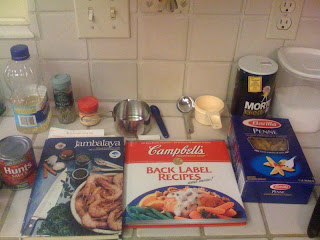 Can you guess which cookbook is Eddie’s and which is mine?

Fairly easy to see that there is a huge difference cooking from a “can” and cooking from a “book”.  But, when I scanned his Jambalaya cook book, I was put at ease, for a minute, as most recipes were only a half page long.

I chose the Persian Chicken as it was the first time I had found a chicken and peach recipe.  Years ago, when traveling in Prague, the best meal Eddie and I ever had…well…all we can recall 25 years later were the peaches and, ahem, the chicken.

Eddie made fun of the way I laid out everything in advance, from teaspoon to roasting pan.  (Is it called a roasting pan if I’m baking?)  Anyway, one hour of prep time – a handy detail left out of recipe – and I was cooking. 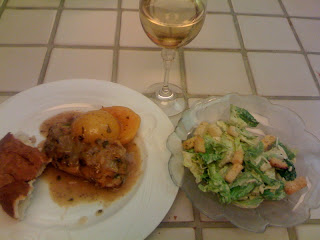 We paired it with a boring St. Supery Sauvignon Blanc.  Vic Herstein, of All Corked Up, thought I was crazy for not liking the wine – actually me thinks he thinks I’m just plan crazy – the wine must have been dulled by the sheer flavors that my worn-to-the-bone fingers brought out in:

Peaches, peach juice (opened a can without injury!), lemon juice, honey, rock-that-knife-to-chop parsley, cried-through-it onion, flour, butter, oil, milk, salt, don’t-know-what-Marjoram-even-is, pepper and chicken.  And there it was: My husband had an evil smile – and maybe future plans – for his little 101 Chef.

(If you have a recipe for-two that you think I can handle, please e-mail it to me at ebushman@earthlink.net.  If I make it I will blog about it, and you, right here.  But give me some time as tonight, what appears to be another long prep time might just be Hamburger Helper without the help.  If he’s still smiling I’m still trying.)