I am finding that while happy to be able to finally make a meal that people can eat, I’ve not been noting the wines.  This was especially true last night when we had at least 6 bottles for 6 people.  Do I make hubby write down my tasting notes while I divide my time between designing centerpieces and browning something-or-another?

This self-imposed Chef 101er and Wine 101er will strive harder to figure it out but for now, suffice it to say, the wine was goooooooood.

This week I took on the dish we ate all month long last June in Italy: Spaghetti Bolognese.  And even though I didn’t get the recipe in Bologna, where yes, of course, it was done the best, I found a lo-calorie recipe here. 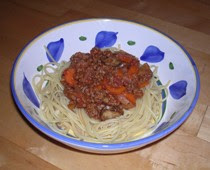 The only changes I made to the above was I wanted it to simmer longer, as the best sauce is always better the next day.   So I transferred the cooked sauce into a crock pot, before adding the milk, and then, about 7 hours later, I added the milk a few minutes before serving.  I also doubled recipe so that I could have my very first spaghetti sauce for lunch too.

PORTLAND, Maine – Registration has kicked off for Vinexpo America and Drinks … END_OF_DOCUMENT_TOKEN_TO_BE_REPLACED