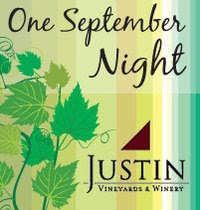 The title of this post is a shout out to wine 101ers and experts near and far.  I had the pleasure of a mini-tasting of Justin wines, with some local dignitaries, but I didn’t get to meet Justin Baldwin himself…yet…

Walking into The Cellar, the wine bar formerly owned by All Corked Up, I was greeted by our host Carl Kanowsky, his son Carl, Michele Buttleman, Morris Thomas, DiMaggio Washington, Jim Ventress and Vic Herstein for a mini Justin tasting.

As Thomas and Buttleman are with the Signal newspaper, and I’m with all the winos, I considered this a “press junket”.  Ventress is a name synonymous with our Boys and Girls Clubs, Washington is the owner of The Cellar and Herstein the wine buyer.

I really didn’t have to concern myself with the whys and what fors as regular press.  I was here for the wine.  But I did makes some notes.

The 08 Justin Chardonnay we started with had plenty of oak, a sharp bite and a slight toastyness.  Very pleasant.  While we sipped and savored Kanowsky told us “his wine story”.  (If you know me you know this is one of my favorite questions in getting to know new wine friends.)

Kanowsky‘s interest in wine developed in the last 8 years.  One bottle a week was all he really enjoyed while his children were growing up; Carl Jr. himself a singer and pianist in the talent shows held at the Boys and Girls club.

But that morphed into more for Kanowsky.  After attending a Wine Spectator tasting in Century Plaza, the “two football field-sized rooms and over 250 wineries” ignited his interest.

From there Kanowsky wanted to tie his passion for wine into fundraisers for the Boys and Girls club.  Three years ago it started with Australian winery Molly Dooker and made over $10,000 for the clubs, last year if was Jaffurs raising the same, this year, with Justin, the stakes may be raised as Justin Baldwin is planning to be there.

Back to the wine:

The next wine to try was an 06 Justin Zinfandel.  The nice 13.8% alcohol did not overwhelm our palates but instead warranted a quiet, smooth nose and well-rounded mouthfeel.

The 06 Justin Malbec had a lovely plum nose, very smooth/soft flavor and light tannins.  Herstein liked this one.

Then we had a treat, a side by side tasting of two of Justin’s blends, the 06 Isosceles and the 07 Justification.  The Isosceles had Cabernet, Cabernet Franc and Merlot and I noted that it was a perfect balance of fruit.  The Justification, Thomas’s favorite, with 65% Cabernet Franc and 35% Merlot, was drier and more tannic.  Both were rated absolutely outstanding by everyone.

LOVINGSTON, Va./PRNewswire/ -- Virginia Distillery Company and members of the … END_OF_DOCUMENT_TOKEN_TO_BE_REPLACED