Fairly simple?  Just so you know, I only have been running recipes that are new for me.  If it sounds too basic, frankly, it’s because it is.  But rest assured, this one hit my yum meter at the top. 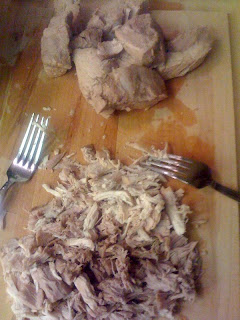 After the crock pot had its way with my pork it looked like this in the photo above.  I went the 4 hours on high, but left it another 2 on low as I was busy writing.  Made for easy shredding.  I had allowed extra time for the fork-shred too as I’d never done it before.  Took maybe five minutes. 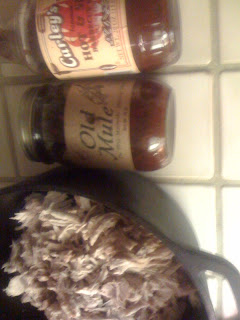 Sorry guys, don’t know how to rotate on the blog yet.  But these were the two BBQ sauces Jeff Marr from BBQ Galore left for me after the Big Green Egg party.  The Pork was OH SO YUMMY with an 2005 AME Cabernet Sauvignon.  Hubby paired with Tater Tots and Ketchup, I choose more wine as my side.
(I got the recipe from Allrecipes.com again.  So far I haven’t been led astray with any of their 5 starred recipes.)

Every year I reflect back on the best wines I’ve enjoyed the past year, and … END_OF_DOCUMENT_TOKEN_TO_BE_REPLACED