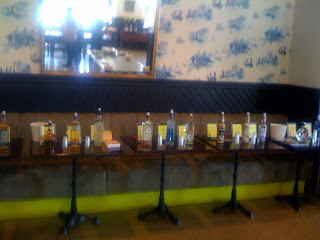 My favorite magazine for media and trade in the wine industry is, hands down, the Tasting Panel magazine.  Of course I read other publications too (Wine Spectator and Imbibe magazine to name just a couple.) but Tasting Panel has the most comprehensive information on new products and…events for trade and media.  In the case of the latter, I attended one stop of the Tasting Panel Tour 2010 last Thursday.

For this event we were invited to Waterloo & City in West Los Angeles and treated to a tasting of both the San Francisco International Wine Competition 2010 Double Gold Winners and World Spirits Competition.

As these were all Double Gold winners, I would never presume to know more than the judges.  I have bolded the ones that I really dug.

A couple of “editorial” notes:  I had to take a break between the Gins and the Tequilas because…well frankly…I was on fire.  I sat down and tried to stick to the least spicy pairings the restaurant had graciously provided.  (Though once again I marveled at some of the peppery items – like spicy tuna – they paired for us. Even when I was just on the red wines, this heat on my back palate held on so tight that I was forced to do more than my share of another item – fig on brie on toast – to resume my tasting.)

Before I left I did check in with staff writer Michael Perlis and his wife Karen, Denise Lowe aka the Goddess of Vino, John Dickey, Brad Roen, Tasting Panel editor-in-chief Anthony Dias Blue, their event planner Allison Levine, and thanked our host, Tasting Panel publisher and executive editor, Meredith May.  Unfortunately I missed late-arriving George Skorka as I barreled through the tasting in a new record: 90 minutes.

MOORESTOWN, N.J./PRNewswire/ -- Wines 'Til Sold Out (WTSO) has a new kind of … END_OF_DOCUMENT_TOKEN_TO_BE_REPLACED