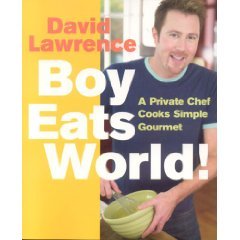 The recipe’s title above and below – duh – is what caught my eye.  Red Wine Soup is really all I saw.

I found it in this cookbook that I bought from Chef David Lawrence.  I really dig him, his cooking classes, and his patience.

So here’s what happened when I made it at home without him:


I had trouble with the quick frying of the meat.  Chef Dave wanted the pan “almost smoking” so that quickly led – too quickly – to “SMOKING” and I found myself opening one window, two doors and fanning my smoke alarm.

After SURVIVING frying the meat I put it into my slow cooker as I planned to transfer it all in there to simmer for four more hours.

The recipe called for a half cup of good red wine.  (That gave me some pause.  How does one purchase bad red wine?  I get that sometimes we use crappier wines for cooking – but I don’t buy them that way.  Sometimes, though, they come as well-meaning gifts…)

I chose a $4 Pinotage I picked up on a lark, as I was surprised to find it, at Trader Joe’s.  Of course taking a small swipe of the bottle at noon seemed risky – not because the wine might have cork taint but because I might want more.  And if that happened I might never finish this recipe:

I love any recipe that tastes as if I slaved all day in the kitchen,when in reality I did nothing more than crack open a couple of cans.This is one of those great soups that has “all-day flavor,” but comestogether in no time at all. The wine adds sophistication and the beefstock adds depth of flavor. Serve this with a great crusty bread, andit’s a meal all by itself.

Heat oil in a Dutch oven over high heat until almost smoking. Seasonthe beef generously with salt and pepper and cook for about a minute(turning only once) until it sears on both sides. You’re looking forcaramelization on the meat but you don’t want to overcook it because itwill finish cooking in the soup. Remove from pot; set aside.

In the same pot, melt the butter and saute the onions, carrots, celeryand bay leaf until they begin to soften, about 2 to 3 minutes. Add theflour and stir constantly for another 2 to 3 minutes, scraping up thebrown bits on the bottom of the pot (lots of flavor here!). You may notrealize it, but you’re making a roux, which will thicken your soup abit later. It’s important to cook the “rawness” out of the flour sodon’t skimp on this step! Stir in the wine, stock, tomatoes and thethyme. Bring to the boil. Reduce heat and simmer gently for at least 15minutes until the vegetables are tender.

Stir the beef andthe drippings back into the soup, cook about 2 more minutes for mediumrare, or until desired doneness. Adjust the seasonings as needed andserve in large bowls. This soup really does eat like a meal.