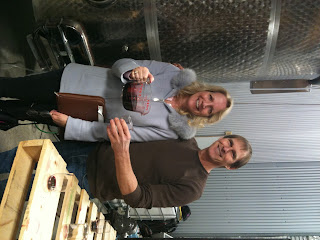 I’d been home a scant two hours after visiting Paso Robleslast weekend, and the one story that I thought would resonate with my readersmost is that of Terry and Jennifer Hoage and Terry Hoage Vineyards.
Terry Hoage, a former defensive-back with the NFL, is alsoarmored with a degree in genetics; his wife Jennifer, is a chef’s daughter andcan identify anything the palate touches.  The Hoage’s moved to Paso 10years ago so that their two young children, one boy and one girl, could live ina more rural – and far less hectic – environment.  Terry said, “More thanwanting our children to be friends with the working class, we wanted our childrento base their friendships in the qualities of the people not their social oreconomic standing.”  They settled in well before Paso became the winemecca it is today and the two weren’t making wine then.
Fast-forward 10 years, and coupled with training from JustinSmith (Wine Spectator’s wine of the year maker from Saxum) and they are intheir heyday as winemakers.  Their children are now in their 20’s, doingwell, and not YET in the family winemaking business. 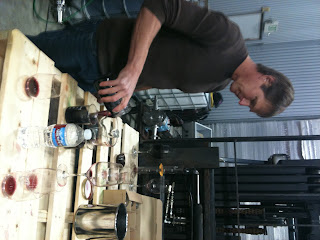 Grenache Beaker Tasting
After entering the cozy front tasting room, Jennifer greetedour party and led us back to meet Terry to see where the real work is done – inthe winery.  The high-ceilingtypically cold room – signifying the change from a tasting room to a work room– had 100% French oak barrels on one side, and a couple of stainless steeltanks on the other.
And dead center was Terry, using the palate on his forkliftas a makeshift lab table, he poured tastes for my group of two different Syrahsfrom the tanks.
We liked them as is.
Then, as winemakers tend to do, he wasn’t completelysatisfied, and exchanged our glasses with another makeshift blend.  This time he had used beakers and alarge Pyrex cup to blend Syrah and Grenache.  Again, we were very happy with what we tasted.
But, more than that, we were exuberant in theexperience.
While we tried to name the aromas and flavors of what wewere tasting Terry, in trying to assist us by simplifying the processcommented, “If it’s not grapes – it’s wood.”
I was smitten.  Now, unsure of whether it was the wine,or the incredibly good looking couple making Paso wine headlines, my onlythought is this: how soon can I come back for another visit?
“I don’t let people back here much,” Terry said during ourimpromptu interview a la’ forklift. “But I’m blending for 09 today.”
Terry continued to tell us his story.  He had been through “13 years ofphysical pain with the NFL” which may have allowed him the endurance, and givenhim the budget, to become one of the much talked-about winemakers today.  (See this month’s Wine Spectator for aspecial on Paso winemakers that include the Hoages.)
Moving to Paso, and becoming organic winemakers, the Hoageswanted to show their children how to grow something, accomplish something, anddo it away from the maddening crowd. And they chose 26 acres to make their Rhone varietals.
OMG The Rhones!
In the tasting room we enjoyed six different Rhone styleblends with play-on-word names such as Pick Pool, The Gap, Coon Waz, Skins, ThePick, The 46, 5 Blocks and The Hedge.
My two favorites were the 2007 “The 46” Grenache-Syrah withnotes of great dark fruit, white pepper that left behind a pleasant drypalate.  50 % Grenache, 50% Syrah,485 cases.
The second bottle I coveted was the “5 Blocks” cuvee with itsdelicate vegetal nose and hints of blackberry and coffee.  57% Syrah, 29% Grenache, 7% Mourvedreand 7% Cinsault, 365 cases.
Of course, I prompt you to go to their website tosee their extensive tasting notes, just to get it right from the Hoages, and tomake your mouth water for your own taste.

LOVINGSTON, Va./PRNewswire/ -- Virginia Distillery Company and members of the … END_OF_DOCUMENT_TOKEN_TO_BE_REPLACED