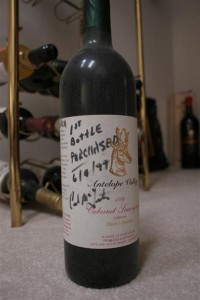 Sent by reader Chantel Kilmer, look who has their AVA now:

LANCASTER – It’s official. Antelope Valley has been declared an American Viticultural Area – a prestigious honor in the world of wines.

An American Viticultural Area is a designated wine grape-growing region in the United States distinguishable by geographic features, with boundaries. Efforts to obtain the designation for Antelope Valley began in 2006, when Antelope Valley Winegrowers Association President Chantel Kilmer contacted Ralph Carter, who is an expert in obtaining AVAs.

“The job now is education, sharing at every opportunity the findings that the US government has certified: your area has unique growing conditions – such as, but not limited to, low humidity, which gives excellent potential for organic wine growing, that so many other part of the country struggle to achieve,” Carter said.

Carter had received notice of the approval from Elisabeth C. Kann, Regulations and Rulings Division of the Alcohol and Tobacco Tax and Trade Department.

“I am very happy to inform you that the final rule establishing the Antelope Valley of the California High Desert AVA will be published in the Federal Register this Tuesday, May 24 as T.D. TTB-93. The rule will take effect 30 days later,” Kann stated..

“Thank you very much for your patience and assistance during this long process, and it has been a pleasure working with you,” Kann added.

The approval came after almost five years of work. It began in 2006, when vineyard owners formed the Antelope Valley Winegrowers Association, contacted Carter.

Carter and his wife Marie visited the area and met with the vineyards owners. The meeting also was attended by Milt Start, a local historian, and Mr. and Mrs. Ralph Ritter, who is a descendant of the Ritter Family who planted the first vineyard and operated the first winery in Leona Valley.

After visiting the Valley and researching the geographic features, Carter determined that the Valley and surrounding areas contained not one AVA, but at least four or five. He immediately started the application process for the different areas.
buy prednisone generic https://infoblobuy.com/prednisone.html over the counter

The first approved was tiny Leona Valley area, followed by the Agua Dulce area. However, because Antelope Valley was so large and had the most vineyards, the process took longer.

“I am proud of all the hard work and cooperation that the wineries and vineyards put into this historic event. And I am very thankful and grateful to Ralph and Marie Carter for all the research and hundreds of hours put into making a dream come true,” Kilmer said Monday morning.

Few people realize that Antelope Valley has become an important winemaking region. Most visitors to the Valley are surprised that the delicate grapes required to make fine wines can grow in the hot, arid desert.

Wines produced with local grapes have already garnered many awards in competition throughout the country. In fact, one vineyard has sold some of their grapes to Napa area wineries to be used in wines produced in Northern California.

Now that appellation has been approved, all bottles of wine produced by local wineries will state on the label that only grapes grown in and around the Antelope Valley were used in making the wines. As Antelope Valley wine is shipped throughout the state, country and world, the Valley will receive global recognition as a winemaking region.

LOVINGSTON, Va./PRNewswire/ -- Virginia Distillery Company and members of the … END_OF_DOCUMENT_TOKEN_TO_BE_REPLACED