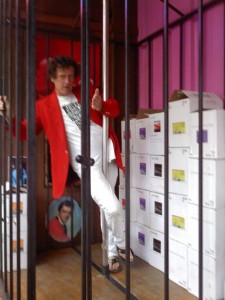 Some time ago, I wrote about visiting winemaker Stillman Brown in the middle of a remote vineyard in Paso Robles, and tasting his wines out of the trunk of his car, with one of the wineglasses still having a stray lipstick mark on it.

Well, for those of you who prefer a more “civilized” experience and still would like to taste Stillman’s wines, I have great news!

On August 28th, I received the following email from Stillman:

“Ladies, gentlemen and fruit flies; friends, family, fans and stalkers, the Zeppelin Wine Hangar is open for business – it’s the official tasting room, shop, and office of Red Zeppelin Winery, and the unofficial tasting room and art and music studio of Swilly Idle, whoever he is.  We’re in cool and refreshing Morro Bay, at 520 Atascadero Road – that’s just off Highway 41, a quarter mile inland of Highway One, the coast route.  Go into the parking lot in front of the antique mall (there’s a big hardware store on the right) and follow the Zeppelin signs.

Since I have a lead foot and golden hands, I can make my vineyard and winery rounds from dawn to noon, so I will be manning the tasting room from 12 to 5 daily.  Come visit, or better yet bring unsuspecting friends!  Stillman”

Now, I use the term “civilized” somewhat loosely, as we are still talking about probably the only winery around with a dancing cage in the tasting room.

It took me awhile, but I called Stillman to ask him what he was thinking and why he would do this now after 27 years in the wine business. He is already one of the busiest guys I know, with 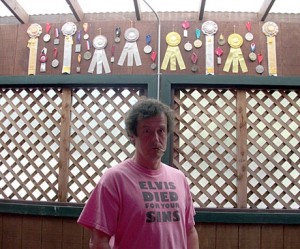 his time spent, in apparent descending order: posting on Facebook, playing rock ‘n roll, consulting winemaker for other wineries, and making wine under his own labels [Red Zeppelin, Zeppelin, and Stillman]. Also, if opening a tasting room, why in Morro Bay instead of in Paso where all the action is? Being in Morro Bay, it seemed to me, would limit his customer base to those who knew enough to seek him out, as well as the visitors from the antique mall and hardware store next door.

When I talk to Stillman, I’m never sure if I am talking to the smartest guy I know  [“or the silliest” was Stillman’s response when I showed this to him] or if he just exudes some kind of aura [even telephonically] that makes my brain slow down. I just can’t keep up. What I did get out of the conversation is that Stillman continues to consult with other winemakers and vineyard owners, as well as make wine for sale under his own labels.

He doesn’t own his own winemaking facility, but uses custom crush facilities in the area.  He is very cautious in his choices of crush facilities, as there is currently such a wide variety of winemaking skills and approaches that some of them turn into “an oenological petri dish”. He primarily uses Robert Hall Winery, and does his bottling at Castoro in San Miguel.

So, I asked him why Morro Bay. Well, it seems the answer is: it made sense. The tasting room is only a mile and a half away from his home, and as a result his life hasn’t changed much [yet]. He is still able to spend his mornings working on winemaking for himself and others, and spend the afternoons posting on Facebook and meeting the occasional customers, in either case being able to “bore the intelligent and terrify the kind”. And the location allows him to throw the noisy parties for which he is famous, and, alas, which I have yet to attend.

Stillman plans to be at the tasting room every afternoon, but recommends you call first, especially during the week. So, “blow up his cell phone” at 805-550-6492.