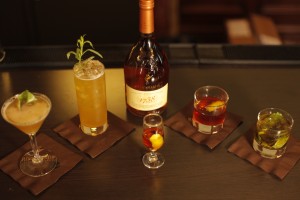 I was so taken with the Rémy Martin 1738 Accord Royal “experience” (Readers can get the cognac-based cocktail recipes on the next four Wednesdays of this website) that I wanted to start this series by giving you some of the information that I learned about Rémy Martin’s Champagne Cognac:

I was invited to  The Ebell of Los Angeles to  join the House of Rémy Martin for an educational and comparative tastings of Rémy Martin 1738 Accord Royal.   During this one-on-one experience, led by Gan Chian-Mei, Rémy Martin brand ambassador, and renowned local mixologist Josh Harris*, we will discuss the history of Cognac and how it played a role in the first cocktails** developed in the 19th century, conduct a taste comparison between Rémy Martin 1738 and other fine spirits derived from grain (whiskey, bourbon, and rum), as opposed to grapes, as well as showcase traditional and modern cognac cocktails – developed by one of the spirits community’s most celebrated mixologists, PDT’s Jim Meehan (New York) and Harris.

The taste comparison, well, I only sniffed at the other spirits that Kyle poured.  One, the rye, was the only one I wasn’t familiar with.  And, even without tasting, the Rémy Martin 1738 Accord Royal really stood out from the pack.  Going back for a second taste, and trying to make some brief notes for myself proved difficult, as the four other people at the bar were regaling me in stories about cognac.

Aromas, and the taste that followed it, was filled with hazelnuts, spice and honey.  Undoubtedly, if I were alone, I may have been able to decipher a wee bit more.

*I’m sure I would have loved to met Josh Harris, but for my experience, I was left in the capable hands of Kyle Ackely, bar manager for the Lexington Social House.