Firefighter Mark at LA City Fire Station #5 (practically on the runway at LAX) had taken on quite the task on Thanksgiving.  He not only spent two days cooking for the crew and their families, he also took on the task of creating two Thanksgiving dinners: One with all the traditional fixings, and one vegan.

That worked out well for me, as in my discussion afterwards with Mark, I learned the secret to one of the dishes that I really dug.

There was no butter or eggs, and in the vegan recipe that Mark served, he deleted the sausage and chicken stock.  I liked the nuttiness and sweetness that the cornbread added and though I thought the pecans that Mark chose over the chestnuts in the recipe were candied, Mark assured me they were not.  Try this for a stuffing that is not made in your bird, vegan or not: 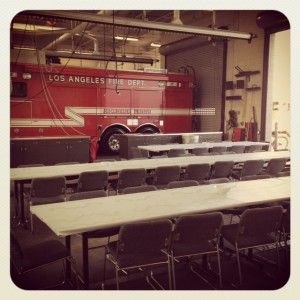 Preheat an oven to 375°F. Butter a shallow gratin pan.

Spread the corn bread and white bread out on a baking sheet. Toast in the oven until light golden brown and dry to the touch, about 20 minutes. Set aside.

In a sauté pan over medium heat, brown the sausage, stirring and crumbling with a fork, until cooked through, about 10 minutes. Transfer to a large bowl.

Return the pan to medium heat. Add the olive oil to the accumulated fat in the pan, if needed. Add the onion and celery and sauté, stirring occasionally, until soft and translucent, 5 to 7 minutes. Season with salt and pepper. Transfer to the bowl with the sausage. Add the corn bread and white bread, the chestnuts, herbs and stock. Season with salt and pepper and stir gently to combine.

Transfer the dressing to the prepared gratin pan, cover with aluminum foil and bake for 35 to 40 minutes. Remove the foil and continue baking until browned and crispy, 35 to 40 minutes more. Serves 10 to 12.