All by James Conaway: As you can see, I don’t necessarily review current books. I typically acquire books that happen to catch my eye, regardless of publication date, and then get around to reading them sometime later – often a lot later. But, not to worry as both non-fiction books are still available.

That being said, the first book mentioned above, NOSE, is about to be published (more about it later), the second covers the history of the Napa Valley from the mid-1960s through the 1980s (along with looks back to earlier times), and the third book picks up where the second left off, taking the reader through the next decade.

Very well written, and very interesting to read about the people originally behind some of the iconic wineries still around today, as well as those wineries no longer with us. The books also give great insight into the various forces and factions that shaped the development of the area – the growers, vintners, investors, conservationists, developers, and of course the politicians.

I definitely recommend reading these books, particularly if you are planning a trip to the area.  Sometimes seeing those famous names, especially the mega-wineries, one forgets that they were started by people just like us. As is often the case, some became victims of their own success and became huge and attractive to large corporate suitors. Did wine quality suffer as a result? Well, that is only for the reader/taster to judge. Fortunately, Napa (and wine regions in general) always see an influx of new talent with the right pioneering spirit to continue to excite us with great wines to please our palates. 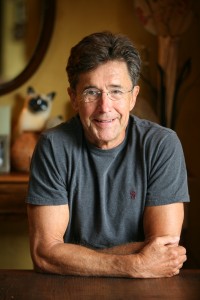 Mr. Conaway is the author of several other books, has written for numerous magazines, as well as being a renowned artist.

I had the opportunity to speak to Mr. Conaway to ask him if he had any plans to add a third volume to his non-fiction Napa series. Well, the answer to that question was “maybe”, but I was very excited to hear about his novel coming out March 2013, called NOSE, which takes place in “Northern California wine country”. While the site is non-specific, Mr. Conaway said it includes elements from “Napa, Sonoma and Mendocino counties”.  Taking place after the “Bush crash, post 2008”, the book, while written as entertaining fiction, looks at current issues in wine country as well as focusing on wine critics, bloggers, and that perfect bottle of wine.

Mr. Conaway also maintains a blog: http://cjonwine.blogspot.com/ which I suggest you check out.  You can read the advance Kirkus review of NOSE there, along with a lot of other interesting stuff.

And contrary to what I said at beginning of the article, NOSE is one book I am really looking forward to reading as soon as it comes out. Mr. Conaway will be touring when the book comes out, so stay tuned for updates on when he will be in Southern California.

Michael Perlis has been pursuing his passion for wine for more than 25 years.  He has had the good fortune of having numerous mentors to show him the way, as well as a wonderful wife who puts up with him. After a couple of decades of learning about wine, attending events, visiting tasting rooms and tasting as much wine as he possibly could, Michael had the amazing good fortune to meet Eve Bushman. Now, as Contributing Editor for Eve’s Wine 101, he does his best to bring as much information as possible about wine to Eve’s Wine 101 faithful readers. At the same time, in his day job he provides outsourced controller services to companies that do not need a full-time controller. One day, he hopes to be able to combine these two pursuits. Feel free to contact him about either at mcpfinancial@aol.com  or michaelthezinfan@aol.com.