A whopping 30 grams of fat scared me off, as did the white color that most bratwurst come in, even though fully cooked and frozen.  But, I trust the Omaha Steaks brand as since I ordered a one year supply of filet mignon I had also sampled other items, like their version of pigs in a blanket (flaky pastry outside, a tasty little “pig” hot dog nestled inside and a wee bit of seasoned mustard in between) that were uber-yummy.

I bought fresh French sandwich rolls, one sweet onion, and a yellow and red pepper for our Brat sandwiches as Eddie wasn’t willing to try anything too daring.

We grilled the Brats in the oven, as per the instructions on the label, while frying up the veggies and making a salad.

They turned a lovely shade of a typical grilled sausage…thankfully!

We also opened up a 2010 Alma Rosa Pinot Noir…which may have been too light for the Brats, but I’d have to say whatever we had paired this with would have taken second stage as there was that much flavor in the meat, vegetables and condiments we used. 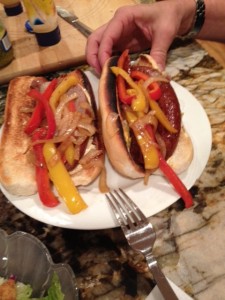 As we made our sandwiches – I added brown mustard while Eddie added yellow mustard and pickle relish – they were looking really good.  Good enough that Ed thought he could swallow up two.