I love living in Europe, and I especially enjoy traveling about the continent by rail. However, train travel does have its drawbacks. For one, it can get monotonous. Then again, popping open a bottle of wine is a most welcome way to pass the time. 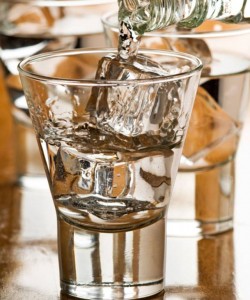 My last article was on Orange wines. I was en route to Slovenia to buy some amber vino for a client. Considering he has 35 retail outlets, I decided to start my homework a bit early. So what is on my mind today as I venture to the Baltic States? What else, vodka.

Between the last two stops I read a most entertaining article on “The Daily Green” that I will share with my readers.

Historians are quite sure that vodka has been with us, at least since Medieval times. Insomuch as its earliest inception, vodka has not only been imbibed, it was often used for digestive and medicinal purposes.

Today, vodka has achieved international notoriety as the world’s most popular spirit. But did you know that the versatility of vodka is virtually limitless? Let’s take a look at some of the more fun and usual ways to make vodka work for you.

1.     Treat Poison Ivy- I have been told that immediately applying vodka to the afflicted area dramatically reduces, and often alleviates any further itching. Do keep in mind that 100 proof is deemed preferential due to the higher alcohol content. And why not? When I was a young US Marine and were traipsing around the jungles of Southeast Asia; our corpsman, “Doc Harry,” as he was affectionately known, often used an Undecylenic acid to treat most outbreaks of rash. Pity Doc Harry chose to treat antifungals with a liquid that is castor oil based. I’m sure that a vodka treatment would have been more fun. And if it did not relieve the itching, I’m sure that by drinking enough vodka, we would have forgotten the irritation.

2.     Freshen Laundry- Now that we know vodka kills bacteria, we can use it to freshen our clothes and remove spots. Rest assured that clothing doused with vodka, when left to dry leaves no scent.

3.     Shine House Fixtures- Would you believe vodka is great when it comes to cleaning chrome, porcelain, and glass. Just rub in a bit with a moist cloth for that long lasting shine.

4.     Preserve Flowers- Just add a few drops of vodka and a teaspoon of sugar to the water within your flower vase. For best results, change water daily and once again add some vodka and sugar. Your flowers are sure to thrive and last longer.

5.     Repel Insects- Vodka is also a great repellent against annoying insects. To thwart the pests, just add a dash of vodka to a spray bottle with some water and spray yourself generously. Remember once dry, vodka leaves no odor.

6.     Soothe Jellyfish Stings- We all know that a healthy dose of urine is a popular way to treat jellyfish stings. Vodka is just as effective, and a less humiliating disinfectant overall. Think back to that episode of “Friends” when Monica suffered a jellyfish sting. If only Chandler and Joey had a bottle of vodka.

7.     Adds Shine to Hair- Anyone who is as vain about their hair as am I, is more than likely aware of a “vodka conditioner.” For lustrous hair, just add a jigger of vodka to a 12-ounce bottle of shampoo.

8.     Clean Away Mold- Since vodka kills germs, we can use it in a multitude of ways to clean. Rather than use harsh chemicals in your newly remodeled kitchen. Pour some vodka in a spray bottle and give your counters a good spritz. Use a little elbow grease as you wipe down for best results. For those troubled areas, spray with vodka, and let sit for a good 15 minutes. Take an old toothbrush and scrub away your troubles.

9.     Make a Soothing Lavender Tincture- Fill a jar with lavender flowers and top off with vodka. Seal the lid tightly and place in the sun for three days. Strain the resulting liquid through a coffee filter and you are left with a homemade remedy to rub into all of your aches and pains.

10.  Since living in Eastern Europe I have learned a simple, yet most effective remedy for temporary toothache relief. Swill a shot of vodka over gums while focusing on the infected area. This will aid in disinfecting and numbing the pain in your gums.

*Initially I set out to entertain my audience with these simple remedies. Upon reflection, vodka is definitely less toxic than most of the chemicals that we use in our daily lives. Nevertheless, I still prefer to drink my vodka.

“Conductor, vodka martini, very dry and with a slice of lemon peel,” I thought for a moment. “Better make it a double, just in case I make spill.”  But that my friends … is a different story.

(*Editor’s Note – If you do “try these remedies at home”, do so at your own risk, we at Eve’s Wine 101 standby by Gregory’s last statement and prefer to drink our vodka as well.)

MOORESTOWN, N.J./PRNewswire/ -- Wines 'Til Sold Out (WTSO) has a new kind of … END_OF_DOCUMENT_TOKEN_TO_BE_REPLACED