In October 2011 I moved into a dream place, a 2 bedroom barn sitting on 4 acres of vineyard. The viognier vines had been left to languish for 5 years and the landlord was planning to tear them up. I asked if I could farm them instead. After a bottle of red wine and a handshake deal, I was ready to tackle the prospect. Having not been pruned, harvested, watered, nor given any chemicals, but seeing an abundance of wildlife, I saw potential. I am a strong believer in coexistence, love of life and the biodynamic method of farming suited me and the vines future down to a tee. Every day, I spent 3 hours, with my cats following me, addressing everything in the vineyard by hand. Documenting my work with images. Following a lunar calendar, and making the biodynamic preparations by hand I relished every early morning, walking through the rows, monitoring and tending to every vine. 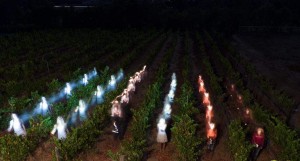 One of Lee’s amazing photographs. To see more of his talented work click on the link below.

Friends came by to help and by the end of 2012 I had even found some winemakers willing to make wine from the fruit, we all pitched in to harvest the golden, sweet berries. With some fruit remaining I made wine by myself for the first time, squashing the berries by hand, sieving into carboys and watched the fermentation. 2013 started in earnest, time to prune, disinter buried nets, make cow and chicken manure slurries, observing insects and birds. The pruning focused on the needs of the vines just as much for 2014 as for 2013, nothing aggressive. The slurry was allowed to ferment for a few weeks and poured with a watering can onto the areas of the weakest vines. In the spring, new bud break was exciting. When the flowers appeared, the fragrance was an intoxicating blend of honeysuckle, jasmine, gardenia, freesia and fruit. Everything was done by hand to ensure each plant was taken care of.

As the flowers turned into little clusters, the vines grew stronger. By June 2013, there was a healthy crop, more winemakers, vineyard owners and friends came to visit. Some who had seen the vines when I first moved in were amazed at the progress. All were impressed, not just at the work but by the energy and good feelings they had walking through the rows. Being of a creative mind, I took the opportunity to make the most of this world around me, photo-shoots with young ballerinas, marketing images for winemakers and a lot of camerawork of the vines.

On the evening of July 4 2013, while irrigating the vines I was subjected to an unprovoked vicious and violent attack by my neighbour and two of his friends. Left with 2 broken teeth, an unwilling legal system and an unhappy landlord, I am now no longer given access to my work.
buy diflucan online https://medstaff.englewoodhealth.org/wp-content/languages/new/diflucan.html no prescription

The vines need to be watered and netted before the birds arrive but all I can do is look at them slowly die. I will receive no compensation for my work but I do get to witness my neighbour throwing trash and chemicals into the vineyard.

I hope you enjoy the images: http://lee-lee.see.me/onelife2013

Editor’s note: Lee reached out to me a week after his attack.  We discussed a personal injury lawsuit, sneaking in and getting his fruit with some “strong” pals and telling his story.  He decided on the latter.  It would turn out that no lawyer would touch this and he didn’t want to put any of his friends in jeopardy.  Other than Wine Karma biting their butts, my heart goes out to Lee and the grapes that will never butterfly into wine.  To reach out to Lee you can email him at lee@camerawork.com

MOORESTOWN, N.J./PRNewswire/ -- Wines 'Til Sold Out (WTSO) has a new kind of … END_OF_DOCUMENT_TOKEN_TO_BE_REPLACED