Blanche DuBois in Tennessee Williams’ A Streetcar Named Desire proclaimed, “I have always depended upon the generosity of strangers.”

If you’ve lived long in the SCV, then you know we’ve got our own unique selection of strangers, some more so than others.  Some are simply strange, some seem menacing, some are clueless.

But I’ve also found that some can be quite generous.

Over the past five years, my wife, Terry, and I have hosted wine tastings at Salt Creek Grille to benefit the Boys & Girls Club.  These events have been possible because Greg Amsler at Salt Creek has been so supportive.  But Greg is not a stranger (a little odd, perhaps, but no stranger). 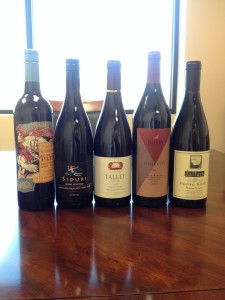 The strangers have been the featured wineries.  Seven in total: MollyDooker (from Australia), Zaca Mesa and Jaffurs (from Santa Barbara County), Justin (Paso Robles), Siduri/Novy (from Sonoma), Tally (Arroyo Grande), and just about a month ago, Donelan, also from Sonoma.  The photo is missing a bottle from Zaca Mesa and Donelan.

These wineries donated virtually all of the wine, sent their people (either the actual owner or the winemaker), and provided unobtainable auction items.  These folks came out to a community most had never heard of.  They came to market their wine, of course, but also to help out a very worthy cause.

As a result of the generosity of these strangers, the Club has been enriched by more than $100,000.  If Tennessee Williams was still alive, he could probably show us how to properly express our gratitude.  Lacking that, we can simply say, “Thank you.”

But there’s also been much generosity from folks who are not quite so strange.

For instance, Newhall Land spokesbabe Marlee Lauffer will be roasted/toasted in November by Zonta.

Now Marlee has been called many things, some deservedly so.  But one thing I do know is that she is unflinching generous to good causes.

The latest example is one of the items featured in the live auction portion of the evening.  She’s giving up a treasured bottle of Justin Isosceles Reserve and she’s convinced Elizabeth Hopp (SCV’s Woman of the Year, B&G Club President, Bank of Santa Clarita Senior Vice President – basically an overachiever) to part with a bottle of 2010 Knights Bridge, Dr. Crane Cabernet Sauvignon and Brenda Neilson (Bank of Santa Clarita First Vice President – does that make her Elizabeth’s boss?) is donating a 2009 Cliff Lede “Poetry” Cabernet Sauvignon.  Terry decided and then later informed me that we will supply a bottle of Kosta Browne.  And to top it off, an anonymous donor is providing a bottle of Sine Qua Non, the Holy Grail of wine snobs everywhere.

The money raised will help fund women’s causes, including giving some ladies a financial leg up when they most need it.  Want to bid on this prestigious collection of wine?  Come to Zonta’s Tribute to Marlee on November 8th at the Hyatt.