My conversation with Sparky Marquis of Mollydooker:

First of all, let’s get one thing clear – Marquis is pronounced “mar-KWIZ”. So go back and reread last week’s article with the correct pronunciation in your head.

I really wanted to know what Sparky felt were the driving factors in Mollydooker’s success, especially in the United States, when so many Australian producers seem to have foundered.

Now there is a lot of detail on the Mollydooker website – a LOT of detail – explaining much more than I could hope to put in this article. I encourage everybody to explore it as there is much interesting information. I just want to report on here what Sparky and I discussed.

The answer really seemed to come down to just a few things: consistent high quality, a customer base that provides better marketing for them than any marketing campaign could, and a little thing called the “Mollydooker shake”.

The consistent high quality is what Sparky refers to as the “WOW” factor, when the customer is drinking a wine that he/she feels is two quality levels higher than what the bottle cost.

Sparky says this is accomplished by first achieving the desired “fruit weight” using their “vineyard watering programme”.  Only grapes that result in wines that have the right “fruit weight” (which Sparky said is a measure of how long the palate experiences the “silky sensation of fruit before feeling the prickly sensation of structure”) are selected for Mollydooker wines, and it is the measure of fruit weight that determines which level of Mollydooker wines the grapes are used for.

To this end, he and Sarah rarely drink any other wine than Mollydooker, preferring to monitor solely what is going on with their wines rather than being concerned about what other winemakers were doing. (They do occasionally have some Jack Daniels.) Sparky said if more winemakers spent time drinking their own wines, they would probably stop making some of them.

Customer support is, of course, critical to Mollydooker’s success. Sparky said they do very little real marketing. Instead, their customers act as ambassadors for the brand. Key to this is Mollydooker’s great customer service. I’ve had my own interactions with Mollydooker’s staff, including Sparky’s mother Janet, and have always received outstanding treatment. Sparky said that wine is different from other products in the way it connects people and contributes to relationship and friendships. Their approach to customer service is just an outgrowth of this.

Even though Mollydooker does minimal formal marketing, Sparky spoke at a marketing seminar recently, where he said he told the attendees: You can market whatever you want as long as everything you say is true.

And the fans of Mollydooker clearly believe this. So, the goal is to get more fans, and to keep them happy. One of the ways they are currently doing this is with a promotion called “Empty the Warehouse – Lips on Glasses” wherein Mollydooker is subsidizing its distributors to enable restaurants to offer Mollydooker at close to retail pricing.

More “lips on glasses” results in more ambassadors for Mollydooker.

And, of course, there is that Mollydooker Shake. Have you heard of it?

According to Sparky, it really started because he wanted to be able to drink wine with his sister, who is highly allergic to sulfites. So, he searched for an alternative preservative and settled on nitrogen.  But, Sparky said that the downside was that the nitrogen “flattened” the flavor. The solution they came up with was to open the bottle, pour, out a small amount, close the bottle, invert it and shake it, and then open the bottle to release the nitrogen. The Mollydooker Shake was born.

Sparky related the story where early on in Mollydooker’s history he was meeting with his wine distributor at a restaurant in Hawaii, and performed the Mollydooker Shake on all the wines prior to having the representative taste them. Little did he know that Hawaii’s #1 wine writer was also dining at the same restaurant, and she was surprised to learn that he was Sparky Marquis, as she had previously told her dining companions that the man shaking the bottles must know nothing about wine. That’s when Sparky knew he needed to pass this information on to his customers.

An article about Mollydooker wouldn’t be complete for Eve’s Wine 101 readers without discussing the fact that all Mollydooker’s wines are bottled under screwcap. I asked Sparky how he deals with those who are still opposed to that type of closure, and he replied he had essentially given up, as there was no rational opposition. Sparky said they had recently opened up several older wines from his winemaking days with other wineries, to share with employees at the Mollydooker Golden Oldies dinner, held at the Marquis household for employees with more than five years of service. The wines had all been sealed with natural cork, and they all showed some sign of deterioration, with a large percentage of them clearly suffering from cork taint.

Sparky said that, in his experience, one in 12 wines bottled with natural cork have cork taint, with another 2 out of 12 wines suffering from what he referred to as “stealth cork”, which while not showing all the negative attributes from cork taint, had been negatively impacted enough to make the wine taste off.

So, the decision was made from the start to only use screwcaps. At first, they did use cork on their top of the line Velvet Glove bottling, but that ended with the 2009 vintage.

The mention of Velvet Glove brought up the accident in 2011, when a full container of the 2010 vintage was accidentally dropped and destroyed, at a value of over $1,000,000. And, even though it was insured, it was still a pretty devastating occurrence, as Sarah and Sparky saw a huge portion of their flagship wine destroyed. But, Sparky said “The outpouring of support and worldwide empathy was so humbling it changed our lives.” 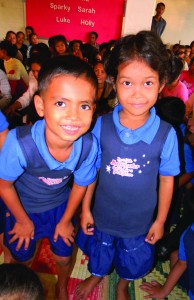 Photo from the Cambodia charity project

But, even before that, Sarah and Sparky had realized how fortunate they were and felt the need to give back. What started in 2008 with creating a special bottling of their Two Left Feet wine called Sip it Forward for which all profits would go to the Transform Cambodia project, they decided that wasn’t enough and now donate a portion of their overall profits to organizations such as:

Sparky ended the conversation sounding somewhat amazed at how fortunate they had been. They had started Mollydooker from nothing, achieved incredible success, and had the opportunity to give back. The fact that he took the time to talk to me at 6:30 AM his time to accommodate my schedule, the same week that he had been talking with Marvin Shanken of the Wine Spectator about finalizing plans for the upcoming New York Wine Experience, meant a lot to me.

Occasionally, Sarah and Sparky host winemaker dinners in the U.S. I’ve always seemed to miss their previous visits, but am looking forward to the next time they are in Southern California, probably sometime early next year. I’ll let you know when it is happening.

In the meantime, go out and get some Mollydooker and give it a shake. I dare you!