From the authors of the best-selling Wine Dogs series (I was in the last one too!) comes this latest homage to the animals behind the wines we love. 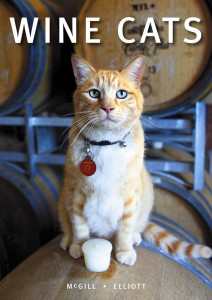 Wherever good wine is made, you’re likely to find a cat snoozing in a sun-drenched tasting room or prowling around the winery. Wine Cats features over 90 wineries from around the world and over 100 stunning photos of their resident moggies. Along the way, the felines are interspersed with short essays by well-known wine writers and viticultural personalities. Find out which cat can eat its own body-weight in papaya, who is the McLaren Vale chicken impersonator, and uncover Napa’s reluctant next top model.

Wine Cats is a beautiful large format coffee-table book which features over 90 wineries from around the world with over 100 stunning photos of their resident moggies. Along the way, the felines are interspersed with short essays by well-known wine writers and viticultural personalities.

Wine Cats is a photographic journal of stunning pictures and great stories: created all for the love of Cats and Wine.

EVE BUSHMAN - Eve Bushman has over 20 years of wine ‘immersion’ experience from attending classes, commercial tastings, winery tours, winemaker interviews and wine studies. She received her Level 2 Intermediate Certification from Wine & Spirits Education Trust (WSET) in November 2010, was the subject of a 30-minute interview on The ‘Wine Down’ internet show, hosts wine events for non-profits and promotes the wine industry with daily content on her website. Her beloved cat, Louis, assists her by using his ever-present curiosity to smell, and attempt to taste, her wine as she reviews it. Her wine columns can be found at EveWine101.com, scvEliteMagazine.com and WestRanchBeacon.com.

HUON HOOKE - Huon Hooke is a farm boy, brought up among a multitude of animals including dogs and cats, not far from Great Western where he worked his first vintage at Best’s. These days he’s a leading wine writer who makes his living entirely from writing, judging and educating on wine. He has been assisted in these endeavours by a series of cats: first Smudge, then Flash, and now Max (16) and Georgie (14). A journalist first and wine professional second, he has tertiary qualifications in both fields and has been writing on wine for 30 years. In 2008 he was named Australia’s Wine Communicator of the Year, although the cats reckon they should take most of the credit. He pens a weekly column for the Sydney Morning Herald ‘Good Food’ section and contributes to Huonhooke.com, Gourmet Traveller Wine, Decanter and other publications. He has published 17 books on wine including a biography of Penfolds Grange creator Max Schubert. Along the way he wrote the intro for the first Wine Dogs book, which started it all for his friends Craig and Sue. He’s been a show judge for 26 years and this year will chair four regional shows and represent Australia in the Six Nations Wine Challenge. When he returns from trips, Georgie turns on the big welcome, but Max just yawns as if to say ‘I didn’t even notice you’d stepped out’. huonhooke.com

BOB CAMPBELL - Bob Campbell was the second New Zealander and is one of just over 300 people in the world to hold the Master of Wine qualification. He is wine editor of Your Home & Garden, Taste magazine and the Air NZ In-flight magazine as well as being New Zealand editor for Gourmet Traveller Wine. Bob contributes to wine publications in seven countries. Over 22,000 people have attended Bob’s wine diploma courses in New Zealand, Asia and Europe. He has been a senior judge in wine competitions in 11 countries. Bob is highly demanded as an after-dinner speaker and lecturer.  bobcampbell.co.nz

ANDREW MARSH - Andrew Marsh is the winemaker at Hunter Valley institution Marsh Estate, in nsw, Australia. A lovable larrikin known to all who frequent the Hunter simply as ‘Marshy’, his passion for wine extends far and wide. He writes for several publications and is highly sought after in the public-speaking arena. His attitude reflects his no-nonsense approach to winemaking and educating people on the virtues of wine. His cheeky grin and black sense of humor make for some interesting times and hilarious tales.

CRAIG MCGILL - Craig is a gifted artist and one of the founding principals of Giant Dog publishing. He photographs exclusively for the Wine Dogs series of books and calendars. realnasty.com.au

DARRYL ROBERTS - In a severe mid-life crisis, Darryl Roberts abandoned his lucrative 9-to-5 wine magazine publishing gig and went back to school to become a Vet Tech. He joined the Healdsburg Animal Shelter in 2011, where he built (from the ground up)their medical program. In 2013, Mr. Roberts left the shelter to start ‘SNAP Cats’ – a rescue and sanctuary for special-needs cats – in Northern California. snapcats.org

TYSON STELZER - Tyson Stelzer is a multi-award winning wine writer with an annual readership of four million worldwide. He is the author and publisher of thirteen wine books and a regular contributor to thirteen magazines.  tysonstelzer.com 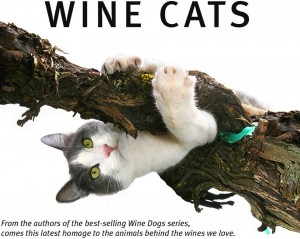