Once again I was trying to make everyone happy with a creamy, meat-filled, pasta dish.  (And, if you’ve been following Chef 101 you know that I prefer to be dairy free.  It’s not, after all, an allergy as my doctor thought.  But after a year without dairy I didn’t miss it – or the bloated feeling.  So, I’m back to a wee bit of dairy!)  The teen wanted ham and cheese, and the hubby, coming off the stomach flu, was not up for an argument.  This recipe was probably the first time, in a long time, that I did more than one thing at a time…if you can count cooking veggies and boiling pasta as two things.  Served with a Clos Pepe Pinot Noir – it was perfect as it really cut through the heavy sauce.  Anywho…my notes are in italics below.  And, forgive me, I forgot to snap a pic of the plated meal and had to retrieve the leftovers from the fridge to get one! 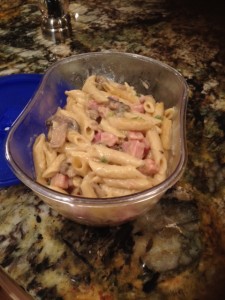 Heat butter over medium low heat; add sliced mushrooms. Cook, stirring frequently, until mushrooms are tender; add green onions. Stir in flour until blended in thoroughly. With the aid of a whisk, stir in chicken broth and milk. Add seasoned salt, pepper, and hot pepper. Cook, stirring constantly, until thickened. Taste and add more salt and pepper, as needed. Stir into the Penne and ham mixture; stir in cheese. Bake at 325° for 25 to 30 minutes, until bubbly and cheese is melted.