I’ve been revisiting Le Chene a lot lately. Well, to be exact, I’ve been revisiting the bar at Le Chene a lot lately because I found out that their happy hour (4:30-7pm Sunday through Friday) not only included 25% off the bar menu, the Candy Menor Tropical Drink Menu, wines by the glass and by the bottle – from probably the largest wine list in the Santa Clarita Valley – it also included a bar menu that is almost as long as the restaurant menu. And if that wasn’t enough the discount was extended to those that like patio dining.

I love patio dining. And I love French food. If you have ever been to Paris you know that most restaurants etch out some sidewalk space for diners. Though the patio is not on the front curb at Le Chene, I’d have to say that a slice of France is delivered when you can sit one story above the gorgeous grounds, and view the trails, flowerbeds and a large working water wheel.

Maybe you’ve brunched or dined there before. I had. But I hadn’t done it at Happy Hour, more like for special occasions.

The Happy Hour allows me to have that same experience every day of the week, except Saturday, because the pricing is amazingly low for exactly the same quality.

What I Got From the Bar Menu

I thought the servings would be, you know, Happy Hours sized. The items I ordered looked just as large as what I had received in the restaurant. So you get a lower-priced bar menu plus the 25% off.

Since discovering this I’ve had quite a few dishes, and brought a few pals who tried some others. Here’s your taste:

The Warm Salmon Salad is served with fresh butter lettuce, vine-ripened tomatoes, fresh mushrooms, the biggest capers I’ve ever seen, a thick vinegar and oil based dressing that I cannot even begin to describe, and all topped with a fresh grilled salmon filet. I could barely finish it, and a friend that ordered it could only eat half of hers!

Next I tried Claudia’s Spinach Salad with juicy pears, sweet walnuts and feta cheese. Even this I could barely finish, but I will be ordering both salads again! 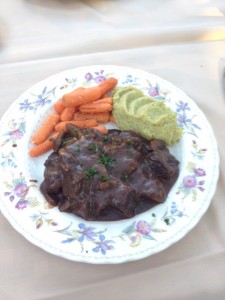 A pal that ordered the Shrimp Salad had a hard time just getting started as it was beautiful to behold: extra large shrimp, slices of tomatoes, mushrooms all bathed in their signature house dressing.

Another friend tried the Seafood Pasta. (My daughter often orders this one in the dining room so I can vouch that it’s the same size.) Minty green colored homemade fettuccine noodles are only partially hidden by scallops, shrimp, crab and calamari…maybe even other treasures from the sea. And the cream sauce is perfect in taking the dish to the next level.

One ½ dozen Escargot, with enough garlicky melted butter that an entire basket of bread could be used to dip into, was more than one woman could handle – though it was her dinner! (I helped her out a little, naturally.)

A couple ordered the Crème Caramel. It did not come in a little ramekin dish, nope, it was in a large oval, definitely enough for two, and in their case, the four other people at their table all had a chance to dive into it.

And, of course, when the bar menu was too much of a teaser, some people did have the large chalkboard menu brought to their table to make selections. Wasn’t sure what they ordered but their patio table was crowded with a decanter of wine as well…

I asked pals what they thought. Everyone had only positive remarks about the food, the wine, cocktails, the patio and the service. Some made observations that they, like me, had seen Le Chene as a special occasion restaurant, one they admitted to forget when a new restaurant becomes the center of short-lived attention.

Not every restaurant has had, or will have, a 34th birthday in the Santa Clarita Valley, and probably for good reason. So, I’m going back to celebrate in the bar, patio and restaurant of Le Chene. Join me.

(Sign up for their e-newsletters and get a $10 off coupon, I did! http://www.lechene.com/mailing-list.html)

Eve Bushman has been reading, writing, taking coursework and tasting wine for over 20 years.  She has obtained a Level Two Intermediate Certification from the Wine and Spirits Education Trust, has been the subject of a 60-minute Wine Immersion video, authored “Wine Etiquette for Everyone” and recently served as a guest judge for the L.A. International Wine Competition. You can email Eve@EveWine101.com to ask a question about wine or spirits that may be answered in a future column. You can also seek her marketing advice via Eve@EveBushmanConsulting.com

Back in 2009, or maybe even a bit earlier, I had an appointment with our … END_OF_DOCUMENT_TOKEN_TO_BE_REPLACED