On the latest installment of Yahoo Travel’s “A Broad, Abroad,” Editor in Chief Paula Froelich sits down and drinks the strongest brew in South Africa with the “reigning Shebeen queen” Pinki Mary Jane Kobe. There, Froelich learns about the history of Pinki’s, a popular bar located in Soweto, South Africa just outside of Johannesburg. And about the strength of the strongest brew, The Leopard.

So what are shebeen queens? 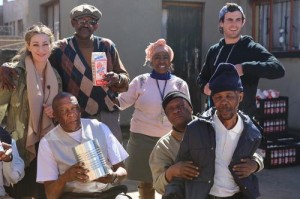 In the apartheid era, nonwhites were not allowed to make or sell bear. Soweto residents did it anyway, brewing their own and hiding it under beds or in the ground when the police checked in for raids. The local watering holes were called shebeens and the women who ran them shebeen queens.

The shebeens get creative

Back when ingredients for beer were expensive, the queens would skimp and make alcohol by soaking bread in battery acid. Now, beer making and selling is legal and ingredients are much cheaper so the days of using battery acid are long gone.

For more information about shebeen queens and Pinki’s strongest brew, the Leopard, be sure to check out the video.