I was smitten and bitten in the very first chapter of “Dial M for Merlot” by Howard K. Who doesn’t love a hero that starts out looking and behaving like a complete nerd only to be awakened by his first taste of really good wine?

Then, be teased with a snippet of the end of the story to learn that he will soon be at the center of a murder mystery? 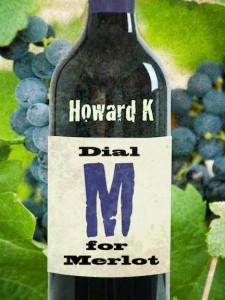 (Not to mention that wine 101ers will also learn a little more about wine, and visit Bordeaux for a huge wine event.  And it proved to me that I don’t have to read all non-fiction books to learn about wine!)

Our hero, Justin James, has his “a ha” wine tasting moment by page 11 and by page 50 he is on the receiving end of a sexual exploit after a very long dry spell. The suddenness and frequency of his now active sex life is akin to the sudden gratuitous sex for Miles in “Vertical” by Rex Pickett, however readers will like James’s character, and his transformation, so the sex is well deserved.

The reader plunges ahead, garnering generous virtual tastes from around the world in the multi-day VinExpo event, touring the countryside and enjoying the local fare – all while the plot thickens around James.

This isn’t a “who done it” but more of “who didn’t do it” kind of story. The end of the tale, of which I will give you no further clues, is shared like a rare bottle of exquisite Bordeaux that is open to all.

In Vino Veritas—in wine there is truth, and the truth is that Justin James is a 30-year-old, socially inept guy who just can’t seem to get a second date. Maybe it’s because of his abiding love for all things sci-fi, including dressing up in costume at every Comic-Con® that comes to town— not exactly the universal definition of “sexy.”

One Friday night, after being stood up for the zillionth time, the lovelorn nerd wanders into a wine tasting at a local shop that opens his eyes, turns on his taste buds and totally changes his life.

Join Justin on an exhilarating, intoxicating and potentially dangerous voyage of discovery and transformation that leads him out of his shell and into the world of fine wine and fine living.

From Florida to France and back, Justin discovers there is so much more to life than just Star Trek, Star Wars or Harry Potter—stimulating, seductive things like fabulous wine, fantastic food, hot sex…and murder. But not necessarily in that order.

Dial M for Merlot is a quirky, humorous novel about the power of positive thinking, positive drinking, and the ability to simply say yes and embrace the unfamiliar and unknown.

First-time author Howard K hopes that you, too,  will embrace the unfamiliar and unknown and read his book, the first in a series of related tales of wine, food, sex and all of the things that make life a grand party. Enjoy!