— Whisky Exploration held to commemorate the return of Ardbeg’s bold experiment in space. Next stop: The Ardbeg Scottish distillery for testing—

NEW YORK, NY – In honor of the revolutionary experiment that was embarked upon in 2011, Ardbeg presented a night of Whiskey Exploration. On last Thursday, October 23, 2014 at The Intrepid Sea, Air & Space Museum, a diverse group of whisky enthusiasts welcomed back the Ardbeg vials that spent three year in space. 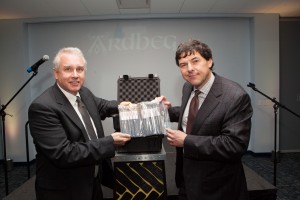 The returned vials were revealed for the first time as Jeffrey Manber, Managing Director of NanoRacks officially returned the vials to Dr. Bill Lumsden, Ardbeg’s Director of Distilling and Whisky Creation. The $1Million insured vials will now return to the Ardbeg distillery in Scotland where Dr.Bill Lumsden will continue to study the effects of microgravity on the compound and produce a whitepaper on the results.

White paper findings from this bold and dynamic experiment will be revealed sometime in 2015. The vials will then commence a tour of the United States and other countries around the world before one lucky buyer will have the chance to bid and purchase at auction.

The Whisky Exploration was the perfect setting for Dr.Bill along with fellow whisky connoisseurs, to come together and celebrate this innovative and ground breaking experiment. The night concluded with a toast of Ardbeg’s newest expression; Supernova 2014- the limited edition malt that was released to commemorate the return of the Ardbeg vial from space.

About the Ardbeg Space Experiment

Only one whisky brand has ever been to space: Ardbeg. For the past three years, a single vial orbited the earth, circling the planet at 17,227 miles per hour, 15 times a day for 1,045 days aboard the International Space Station. This pioneering research experiment was a partnership with US-based space research company, NanoRacks, whish used samples from the inside of a new American Oak barrel, along with samples of a special liquid containing a number of Ardbeg crafted molecules such as terpenes, aldehydes, and fatty acid esters*.

In a first-of-its-kind experiment, the vial—the #spacedram, if you will —is undergoing scientific study to determine the impact gravity has on maturation process of this compound. Dr. Bill Lumsden, Ardbeg’s Director of Distilling and Whisky Creation, is among the team conducting that study, and the results will be published in a forthcoming white paper which may revolutionize the whisky-making process.

Ardbeg prides itself on being the ‘Ultimate Islay Malt Whisky’. Established in 1815, Ardbeg is revered by connoisseurs around the world as the peatiest, smokiest and most complex of all the Islay malts.

Despite its smokiness, Ardbeg is renowned for its delicious sweetness, a phenomenon that has affectionately become known as ‘the peaty paradox’.

During the 1980s and 1990s, Ardbeg suffered from an uncertain future and it was not until the brand was purchased by The Glenmorangie Company in 1997 that the Distillery was saved from extinction. Since then, the Distillery has risen like a phoenix and today Ardbeg is well established as a niche, cult malt, with a passionate following. The legacy of the whisky was safeguarded by the formation of ‘The Committee’ in 2000 from thousands of Ardbeg followers across the globe keen to ensure, “the doors of Ardbeg never close again.”

Ardbeg was voted ‘Scotch Whisky of the Year’ three years in a row by Jim Murray’s Whisky Bible and was awarded ‘World’s Best Single Malt’, ‘Best Islay Single Malt’ and the ‘Global Icon Visitor Centre Manager of the Year’ at the World Whisky Awards 2013.

Ardbeg recently released a new expression of their peatiest single malt: the sold out, highly sought-after Supernova. Available exclusively to the 100,000 Ardbeg Committee members and fittingly named after a super-bright explosion of a star, Ardbeg Supernova went on sale around the world on September 12, 2014. Supernova commemorated the return of Ardbeg’s pioneering research experiment in space.

Ardbeg and The Glenmorangie Company advocate responsible drinking and suggest that drinkers savour Ardbeg in moderation and in line with recommended daily guidelines for alcohol consumption.

Back in 2009, or maybe even a bit earlier, I had an appointment with our … END_OF_DOCUMENT_TOKEN_TO_BE_REPLACED