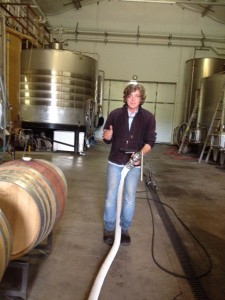 Stephan Asseo, an accomplished winemaker with 17 vintages in Bordeaux, sought to live his creative dream within a new region in the world and in 1998 founded L’Aventure Winery with his wife Beatrice in Paso Robles. He meticulously selected and planted on a 127-acre property in the western hills of Paso Robles with the vision to create world-class wines of Bordeaux and Rhône varieties. As an experienced vigneron, his farming techniques and philosophies were quickly recognized by the local grape growing community, spurring a renaissance of creative ideas for many of the new vineyards at the time.

“Stephan’s influence on the appellation, beyond the national and international notoriety he has drawn with L’Aventure wines, has been exiting” said Marc Goldberg, Winemaker/Proprietor, Windward Vineyard. “Prior to his estate vineyard maturing, he sourced grapes locally and influenced how growers and winemakers could work together to produce high quality wines. Stephan is the embodiment of the maverick spirit that is Paso Robles, which is evident in the unique and inspired wines he creates.”

Asseo’s winemaking has resulted in wines which have earned high scores and critical acclaim, bringing media, trade and consumer attention to Paso Robles Wine Country. Stephan travels the world to promote his wines and in hand promotes the region by referring to L’Aventure wines as his best expression of the Paso Robles terroir.

Along with being a well-respected local businessman with donations to local causes, Asseo was awarded as the 2007 San Luis Obispo County Winemaker of the Year, a past board member of the Paso Robles Wine Country Alliance, has the respect and admiration of wine community colleagues, and is a consistent voice in the local industry.

The Alliance’s annual gala event hosts more than 180 members of Paso Robles’ wine community with elected officials and representatives from national, state and local offices on hand to commemorate the honor. This year’s themed event will be held at Tooth and Nail Winery on Highway 46 West.

Board of Directors Installation

In addition, the 2015 Paso Robles Wine Country Alliance Board of Directors and Executive Team will be presented:

LOVINGSTON, Va./PRNewswire/ -- Virginia Distillery Company and members of the … END_OF_DOCUMENT_TOKEN_TO_BE_REPLACED