Looking at light noodle meals…it wasn’t until I got home from the market did I realize that there was no actual meat in this recipe. Lucky for me hubby was recovering from a stomach bug and really couldn’t manage much, and the two tablespoons of fresh minced ginger would be restorative, IMO. My daughter wasn’t fond of the rice vinegar flavor – she asked that I replace it with Teriyaki sauce which I felt would be too thick and sweet, she could add that in herself. I found the vinegar a wee bit strong too, so along with reducing that, my other changes are in italics below. 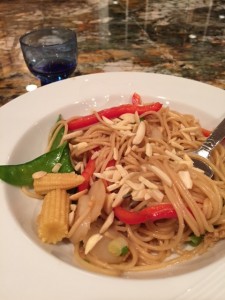 Whisk together first 6 ingredients in a medium bowl; set aside.

Cook spaghetti according to package directions in a large Dutch oven; drain and return pasta to Dutch oven.

A few weeks ago I received an email from Naushad Huda, the “Voice of Modern Wine … END_OF_DOCUMENT_TOKEN_TO_BE_REPLACED